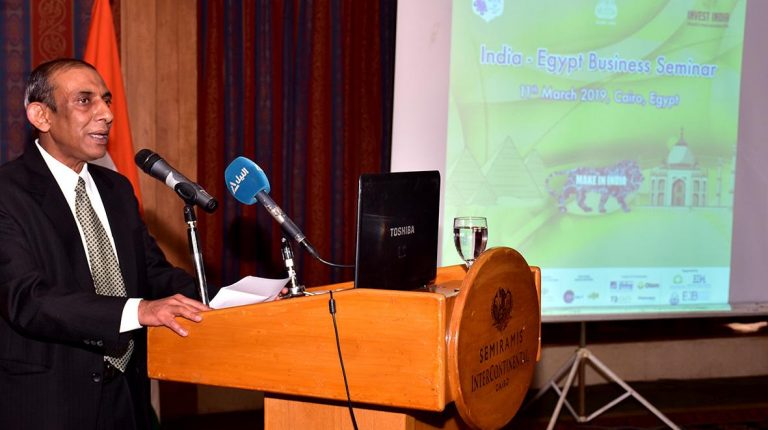 India adopts a new strategy to push up its investments in Egypt to about $5bn in the coming period, versus about $3bn now through 50 companies, Indian ambassador to Egypt, Rahul Kulshreshth, said.

India is keen to boost its investments in Egypt, asserted the ambassador, noting that the Egyptian authorities scored great success at the economic level in the past period which promoted the Egyptian economic growth rate.

It came during the India-Egypt Business Seminar organised by the embassy of India in Cairo, in association with Invest India agency, during the India by the Nile festival.

A high-profile delegation from Invest India, led by its Managing Director and CEO, Deepak Bagla, is visiting Egypt currently to address a couple of seminars in Cairo and Alexandria, and to meet the Egyptian businesspersons and investors from Federation of Egyptian Industries, Egyptian Businessmen Association, Egypt-India Business Council, Cairo Chamber of Commerce, and Egyptian Junior Business Association.

Bagla met with representatives from Alexandria Chamber of Commerce and Alexandria Business Association. The seminars focused on the current status of bilateral trade, investment, and potential areas for investment in the context of various flagship programmes of India, including Make in India, Digital India, Skill India, Startup India, and Smart City Mission.

Egyptian investors and the business community will be updated about policies and initiatives taken by the government of India to promote investments in India.

During its visit, the Invest India delegation met with senior executives and members of General Authority for Investment and several Egyptian companies.

Egypt has traditionally been one of India’s most important trading partners in the Arab-African region, said the ambassador, noting that during the fiscal year (FY) 2017/18, trade exchange between India and Egypt was estimated at $3.68bn.

On year-over-year basis, Indian exports to Egypt increased by 15.5% in FY 2017/18, whereas Indian imports from Egypt also increased by 11.3%, Kulshreshth added.

During the period from April to December 2018, trade exchange between Egypt and India reached $3.55bn. India is Egypt’s 10th largest export destination and also the 10th largest import source for Egypt, he mentioned.

The Indian ambassador said that his country is expected to be the third biggest economy worldwide by 2030, which would reflect big investment opportunities in India in the coming period.