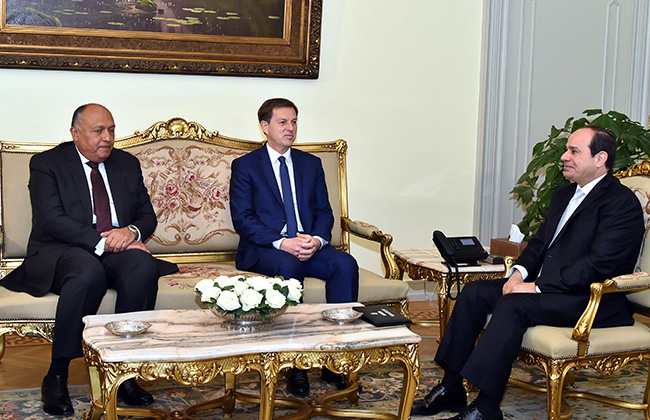 The meeting focused on continuing to strengthen the distinguished relations with Tanzania in various fields, especially in view of the results of the successful visit of the Tanzanian President in August 2017 to Egypt. Al-Sisi praised the signing of the contract for the construction of Stiegler’s Gorge Hydroelectric Power Station in the basin of the Rufiji river between the Egyptian companies and the Tanzanian side.

Minister Mwinyi expressed Tanzania’s aspiration to enhance cooperation between the two countries’, in light of the holding of the military committee between the two countries in Cairo, especially coordination in the field of combating terrorism. He expressed his pride in Egypt’s progress in military industries and national projects currently being implemented, stressing Tanzania’s aspiration to benefit from the technological and human expertise available in the Egyptian military production companies.

The meeting  included discussions on ways to enhance bilateral relations in a number of areas of joint cooperation, in addition to discussing intensifying mechanisms of consultation and exchanging views on the most important emerging issues in the continental arena, in light of the Egyptian Presidency of the African Union, especially the Nile Basin countries.

Moreover, Al-Sisi also received the Deputy Prime Minister and Minister for Foreign Affairs of Slovenia, Miro Cerar, in the presence of the Foreign Minister Sameh Shoukry, and the ambassador of Slovenia to Cairo.

The meeting came during the Slovenian Prime Minister’s first official visit to Egypt. Al-Sisi stressed Egypt’s keenness to promote and develop the bilateral cooperation between the two countries in various fields, and expressed his hope that the current meetings of the Egyptian-Slovenian Joint Committee, under the chairpersonship of the foreign ministers of the two countries, start a point for advancing the cooperation between both countries.

Moreover, Al-Sisi also welcomed the holding of the Egyptian-Slovenian Business Forum on the sidelines of the committee’s meetings, which will contribute toward enhancing investment and trade relations between the two countries and benefiting from the opportunities offered by the Egyptian-European Partnership Agreement.

The Slovenian official expressed his country’s keenness to push forward its bilateral relations with Egypt as it represents an important and fundamental pillar of stability in the Middle East and Mediterranean regions, especially the economic relations between the two countries, in light of the recent developments in the Egyptian economy, and offered the current major national projects in Egypt as promising investment opportunities, especially in the Suez Canal Economic Zone.

The minister praised the success of the Arab-European summit recently held in Sharm El-Sheikh and the results achieved, and agreed on the importance of building upon these results to enhance understanding between Arab and European regions in order to deal with their common concerns.

A visit to a frightening, angry Cairo