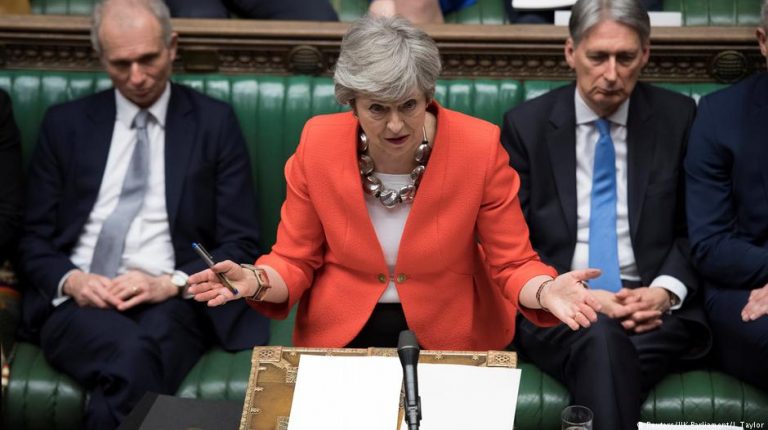 The United Kingdom is in the political wilderness after lawmakers resoundingly rejected Theresa May’s revised Brexit deal. The prime minister has only weeks to stop the UK from crashing out of the bloc without a deal.British lawmakers on Tuesday handed a second major blow to Prime Minister Theresa May's withdrawal agreement with the European Union, voting down the revised deal 391 to 242.

"I profoundly regret the decision that this House has taken tonight," May said.

"I continue to believe that by far the best outcome is that the United Kingdom leaves the European Union in an orderly fashion with a deal, and that the deal we have negotiated is the best and indeed the only deal available."

May had hoped that last-minute clarifications and additions to the deal's so-called Irish backstop would convince skeptical lawmakers to back it.

But that prospect quickly faded after the government's most senior lawyer, Geoffrey Cox, told Parliament that the additions did not fully address skeptics' legal objections to the backstop.

Read more: Brexit: Why is the Irish backstop so controversial?

No end in sight

The defeat came just 17 days before the world's fifth largest economy is due to exit the EU.

Lawmakers are set to vote on Wednesday on whether Britain should leave the EU without a deal — a scenario that could severely hit the British economy and EU businesses that rely on UK trade.

If MPs vote to rule out no-deal, Parliament is scheduled to hold another vote on Thursday on whether to ask the EU for an extension to the March 29 deadline.

"Let me be clear," May said. "Voting against leaving without a deal and for an extension does not solve the problems we face. The EU will want to know what use we mean to make of such an extension and this House will have to answer that question."

Read more: As Brexit looms, how dependent is Ireland on British trade?

Jeremy Corbyn, the leader of the opposition Labour Party, said May had to accept that her deal was "clearly dead" and renewed his call for fresh parliamentary elections.

"The Prime Minister has run down the clock and the clock has been run out on her," he said. "Maybe it's time instead we had a general election and the people could choose who their government should be."

A spokesman for European Commission President Donald Tusk said the remaining 27 EU member states regretted the outcome of the vote.

"On the EU side, we have done all that is possible to reach an agreement," he said, adding: "It is difficult to see what more we can do."

The UK would have to provide "credible justification" if lawmakers voted for a deadline extension, he said.

German Foreign Minister Heiko Maas said May's defeat "brings us closer to a no-deal scenario," but that "Germany has prepared itself as well as it possibly can for the worst of all possible outcomes."