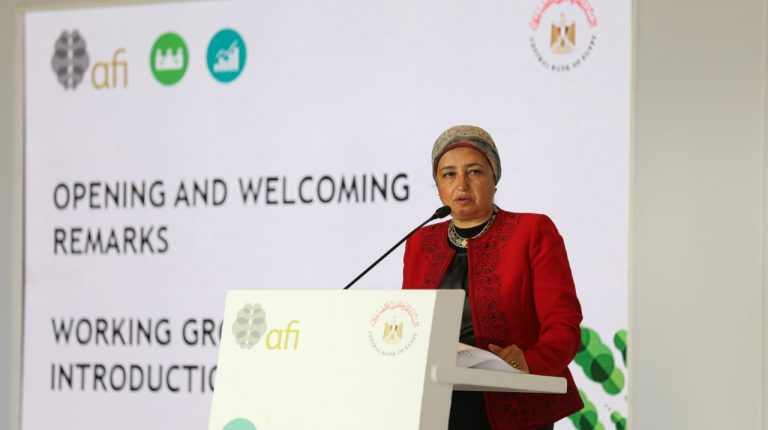 The Central Bank of Egypt (CBE) and the Alliance for Financial Inclusion (AFI) launched jointly a series of key working group meetings in Cairo on Monday 11 March. This is the second event co-organised by the two institutions.

Deputy Governor of the CBE, Lobna Helal, and Deputy Executive Director of the AFI, Norbert Mumba inaugurated the event.

Helal stated: “These meetings mark our second event co-organised with the AFI. Together, we draw on our successful experience from the 2017 Global Policy Forum in Sharm El-Sheikh.”

“The CBE has a clear vision to achieve financial inclusion across the country through digital financial services, in line with the launch of a number of initiatives to finance micro, small, and medium-sized enterprises (MSMEs) as well as mortgage finance,” Helal affirmed.

She outlined the steps taken to encourage the transformation toward a cashless society under the umbrella of the National Council for Payments, chaired by the Egyptian president, notably the approval of the Less Cash Law, the launch of the first national ‘Meeza’ payment card, and the mobile wallet service, as well as compiling ongoing accurate database and measuring the level of financial inclusion.

Underscoring these efforts was the appointment of Helal as the AFI’s vice chair of the Gender and Women’s Financial Inclusion Committee since 2017.

In recognition of the pivotal role played by the CBE in promoting and supporting financial inclusion at local and international levels, Tarek Amer, governor of CBE and vice-chairperson of the AFI board, will take over as AFI board chairperson in September 2019 in Rwanda.

The FID working group, co-led by the CBE with other AFI members, will guide discussions to find a common framework that measures financial inclusion.

The AFI provides its members with a unique peer-learning platform through a bottom-up approach which enables and promotes sustainable and impactful financial inclusion policies and regulations around the world.

For his part, Mumba said: “Working groups represent the heart of the AFI. The presence of approximately 100-member representatives here today reflects the importance that you attach to these meetings, which are the centre of financial inclusion policy development and leadership globally,” in his key note speech to delegates.

The AFI is the world’s leading global knowledge exchange platform in the field of financial inclusion.

It was established in 2008 and currently includes 90 developing countries represented in 103 institutions – ministries of finance and central banks. It develops tools used to promote financial inclusion, exchanges technical, and practical expertise among AFI members while assisting them in formulating reform policies, strategies, and implementation mechanisms. The CBE joined the AFI in 2013.