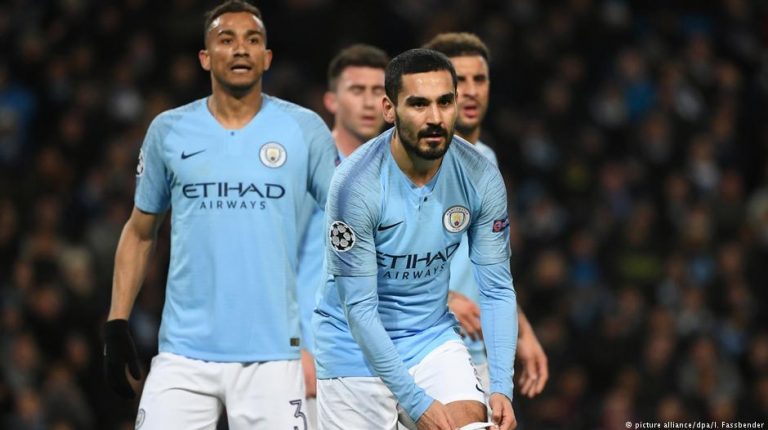 While Leroy Sané caught the eye against his old club, Gelsenkirchen-born Ilkay Gündogan was the conductor of Pep Guardiola’s Manchester City orchestra. The midfielder is finding peak form again at an interesting time.As difficult as it was to remember at the end of Manchester City's 7-0 mauling of Schalke, the Premier League champions had a few issues unpicking the multiple locks of Schalke's back nine early in the game.

The relentless, patient, probing, short passing that sets Pep Guardiola's side apart from most opponents had only created a single chance until Ilkay Gündogan decided a change of tack was necessary. The German midfielder found some space and popped a longer ball over the top of Schalke's defense in an attempt to find Bernardo Silva's run. Jeffrey Bruma was slow to read the change of style and stuck out an arm to prevent Bernardo reaching the pass. Sergio Aguero tucked away the penalty.

Gündogan had found the weak spot of his hometown team and, like all good athletes, he exploited it immediately, ruthlessly and frequently. Two minutes after the goal, he sent Aguero in behind with another floated ball only to see the Argentinian's shot saved by Ralf Fährmann.

Aguero made up for it shortly after, tucking away Raheem Sterling's backheel after yet another lofted Gündogan ball set the English winger away. Six minutes, three sublime passes, two goals, one exceptionally gifted and intelligent midfielder.

Sané piles on the pain against old club

Gündogan's compatriot Leroy Sané got the third before the break against the club that raised him before setting up the fourth, fifth and sixth as City piled on the humiliation. Sané, 23, has, like many players, improved considerably under the tutelage of Pep Guardiola. His workrate, discipline, decision-making, final ball and finishing are all several notches up from the levels they were when he left the Bundesliga in August 2016, two months after Gündogan.

That development has seen Sané emerge as a key figure in Joachim Löw's belated attempts to build a "new Germany" after he was omitted from the 2018 World Cup squad. But his club teammate hasn't quite made that step. Since Russia, where he was embroiled in the controversy that eventually led to Mesut Özil's resignation from the national team, Gündogan has played just 108 minutes of Germany's six matches, missing two with a hamstring injury. He was also left out of the last squad.

Injuries are an all-too familiar facet of Gündogan's career and account partly for the fact that the man that Guardiola made his first City signing has won just 29 caps since making his international debut in 2011. But he's made 24 Premier League appearances already this term and excelled in a deeper-lying role of late.

The quality of players in his positon has been another reason why he's not kicked on at international level. But with Toni Kroos struggling at Real Madrid and seen as part of the old guard, Sami Khedira consigned to the past, Joshua Kimmich arguably more adept at right back and Leon Goretzka struggling slightly with his fitness, Gündogan could well get the chance to stake his claim against Serbia and the Netherlands in the next 12 days.

Before the game, Gündogan hinted that he may leave City in the near future, with his contract expiring at the end of next season. Guardiola said of the midfielder "if he doesn't want to stay, he has to leave".

"This is something everyone has to decide for themselves," Gündogan said. "I am 28 years old now so my next contract will maybe decide where I will be for the end of my career. Everyone feels different. Maybe someone has an inner feeling in his self to go for a new challenge or to change something."

Those words have led some to believe he'll return to Borussia Dortmund, where he made his name under Jürgen Klopp. As if he hasn't made Schalke suffer enough already.