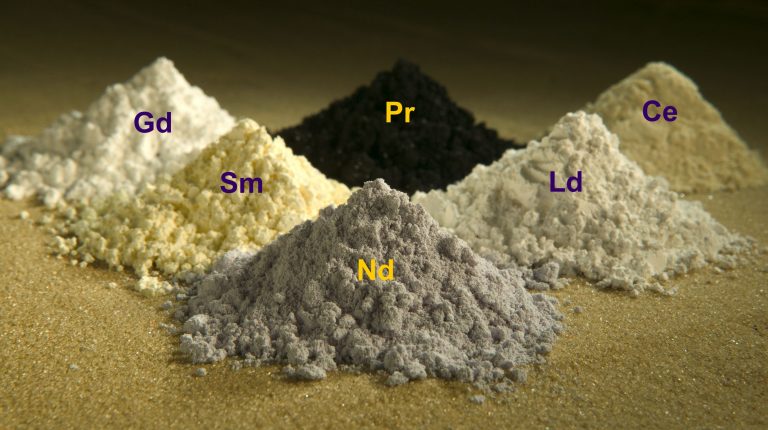 For the past several years, the United States government has been concerned about the supply issues of materials which are critical to technologies including batteries, magnets, and clean energy solutions, such as solar panels and wind turbines.

For a large class of these elements called Rare Earth Elements (REE), China is by far the world’s largest producer–90% of REE were produced in China in 2011–and so it is of economic and scientific interest to find alternate sources of REE.

REE are a group of elements which include 17 chemical elements, 15 of which belong to a series of lanthanides found at the bottom of a periodic table, such as lanthanum, neodymium, samarium, atrium, and scandium.

Although they are called rare elements, they are not rare at all, as they are more plentiful and abundant than silver, gold, and platinum, and the least plentiful elements of the REE are leucite and thulium. Extraction of these elements is a highly cost-effective process especially on agricultural land. The process of extracting 1 tonne of these elements costs the world 300 metres of fertile soil.

One of the potential sources of REE is phosphogypsum (PG) which is a waste product of the fertiliser industry, according to a new study published recently in the Journal of Chemical Thermodynamics.

The total amount of REE thrown away by the fertiliser industry counts more than 100kt, and is on the same order of magnitude as the amount of rare earth oxides produced by the entire world (more than 126kt).

“For this reason, we were interested in building up the scientific literature about the leaching of REE from PG in several different acid systems. Results from our study are the first step in making predictions about the cost efficiency of leaching REE from PG in real world industrial applications,” Richard Riman, from Rutgers University and corresponding author of the study, told Daily News Egypt.

Riman added that he and his team used a biologically produced acid called bio lixiviant, which is expected to be less harmful to the environment than traditionally used mineral acids which are very acidic. This bio lixiviant was produced by collaborator researchers from Idaho National Labs and is primarily composed of gluconic acid created by bacteria.

Along with the bio lixiviant, the team tested a pure commercial gluconic acid, sulfuric acid, and phosphoric acid on synthetic PG samples containing the REE, such as yttrium, cerium, neodymium, samarium, europium, and ytterbium.

It was unexpectedly found that at the same pH (2.1 in the study’s case) phosphoric acid and sulfuric acid failed to solvate REE while gluconic acid “did a great job,” according to the paper. pH in chemistry refers to a logarithmic scale used to specify the acidity or basicity of an aqueous solution.

Riman further explained that gluconic acid is a much weaker acid compared to phosphoric and sulfuric acids since at the same concentration it releases a far smaller amount of free proton (H+), so it would usually be expected to solvate less REE. The better leaching results for gluconic acid over the sulfuric and phosphoric acids is due to the chelation of the REE.

“We also tested the lixivants at equal concentrations (220 mm).  In this scenario it was found that the order of leaching efficiency (from most to least) was sulfuric acid, bio lixiviant, gluconic acid, and then phosphoric acid for all REE except yttrium. Yttrium was almost equally leached by all four lixiviants.  In all cases the bio lixiviant was superior to the commercial gluconic acid in REE leached,” the corresponding author of the study added.

Regarding the methods that the researchers have used to reach the results of the study, Riman said that the main characterisation method used in the study was Inductively Coupled Plasma- Optical Emission Spectroscopy (ICP-OES).

This tool uses a plasma to ionise the elements making up a solution phase sample. Each ion will then emit light at specific wavelengths for each element. These wavelengths are well tabulated in literature and therefore the amount of each element can be correlated from the intensity of light emitted from the sample.

The researchers used this method to find out “how much of each rare earth element was leached into solution by the acids we tested.”

For the bioleaching work specifically, the experiments were started about a year ago and the paper was written over the summer. Passing the manuscript around to many research collaborators for revisions took a few months after that. For more general work on rare earth phosphate solubility and characterisation as well as some other analysis of phosphogyspum, the research group has been performing experiments for several years with the help of their collaborators who are part of the Critical Materials Institute.

“Regarding the purposes of our work, I believe we did a good job answering the questions we were interested in. However, we made no steps toward assessing the cost effectiveness of our methods in real world extraction processes. We have instead provided important data that could allow others to make a more educated determination about economic viability,” said Riman, stressing that this is a topic that must be considered by any prospective business wanting to benefit of rare earth leaching.

He added that he and his team will certainly be continuing work on the extraction of rare earth elements from waste streams. One of the decisions they will be making in the near future is whether they want to continue studying phosphogypsum as a mineral of interest or other waste products from the fertiliser industry which also contain large amounts of rare earths.