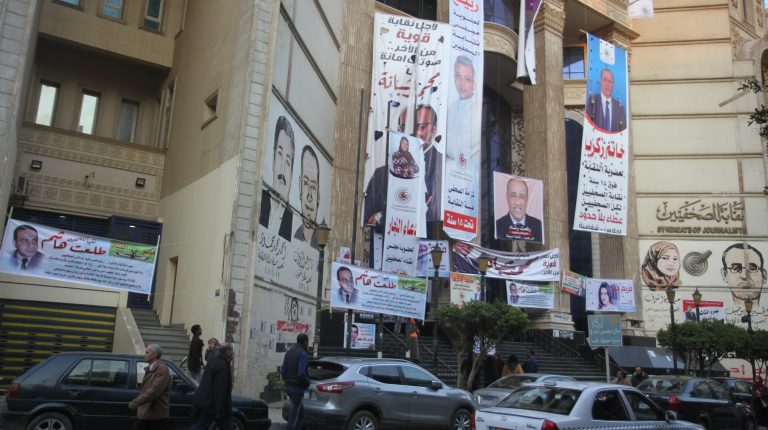 Eleven candidates are competing to lead Egypt’s Press Syndicate, the largest number of nominees in the history of the union, in which their electoral campaigns are focused on increasing the allowance granted to support digital journalists.

A total of 51 candidates are also competing over the six seats available of the syndicate’s board in the mid-term election, all of them focused on social and health rights, with hardly any of them focusing on freedoms.

On 1 March, the midterm election of the syndicate over the president and six seats in the syndicate’s board council was postponed to 15 March due to lack of completion of the quorum. A general assembly was held in the presence of 716 journalists but was not enough to hold the election, as at least 4,312 journalist members out of a total 8,624 members are requested to register their attendance in the general assembly.

The election could be postponed for another two weeks in case the quorum is not complete on 15 March.

Members who are running for the board of those who finished the previous terms are Hatem Zakaria, Khaled Miri, Mohamed Shabana, and Mahmoud Kamel, while former members of the council in general are Khalid Al Balashi, Hanan Fikri, and Hisham Younis.

The majority of the candidates running for the council’s membership are from state-owned news outlets, with 11 from Al-Akhbar and Akhbar Al-Youm newspapers, seven from Al-Ahram newspaper, four from Al-Gomhouriya newspaper, and three from the Middle East News Agency (MENA).

A smaller number of candidates are running from private-owned newspapers, while three are running as independent journalists, the most known of which is Khaled Al-Balshi. Al-Balshi, a former member of the council and a human rights activist, used to head the online leftist news site Al-Badia.

Renowned journalist Diaa Rashwan, who is running for the presidency seat, vowed to improve the financial conditions of journalists and increase their monthly technology allowance, saying that Prime Minister Mostafa Madbouli, and the Minister of Finance, Mohamed Moeit, had already agreed to increase the allowance by 25%, starting from July to reach EGP 2,100 and promised to increase pensions, currently set at EGP 1,450, by 20%.

Rashwan is planning to increase the allowance based to the inflation index by forwarding a draft government. This is one of his previous plans when he was the head of syndicate in 2013.  Rashwan was elected as the head of the Egyptian Press Syndicate, however, he failed to secure a second term in 2015.

Meanwhile, the Deputy Editor-in-Chief of state-run Al Gomhouria newspaper, Sayed Alexandrani, said that after submitting his candidacy papers, he went to the prime minister’s office to request an increase of the allowance to EGP 5,000.

Alexandrani also confirmed his ability to solve all problems of the union within six months throughout his full time, noting that he has failed in all the previous rounds, however he decided to run for the current election to serve journalists.

Moreover, Talaat Hashem, the Editor-in-Chief of the Young Egypt Party (Misr El-Fataa), running for the presidency seat, said that this was the third and final time to compete in the elections and that he will work on increasing the allowance to EGP 5,000 because the allowance is one of the means which honours journalists.

Despite the fact that the number of candidates running for the seat of the press syndicate has reached eleven, the competition seems to be dissolved between Rashwan, and board member of Akhbar Al-Youm Rafaat Rashad, due to their popularity in the press milieu and the fact that they have considerable work experience comparing to the rest of candidates running for the same seat.

Akhbar Al-Youm’s Rashad said that he was standing to “protect fellow journalists and freedom of expression” and would prioritise journalists’ cases who have been expelled from their workplaces as well as fight for increases in wages and pensions.

He wants the monthly technology allowance to be linked to inflation and promised to work to improve healthcare services available to journalists. Rashad also warned that the newspaper industry was passing through a critical phase, the repercussions of which pose a threat to the livelihood of journalists.

Abdel Sattar said that the profession needs a boost and that comes on the top of his electoral programme to solve the problem of 2,000 journalists affiliated to political parties, and he refused for the increase of the allowance to be described as a way to buy votes, suggesting its increase as periodic bonuses per year by 10%.

Meanwhile, Maghrabi said that “this is the third time to nominate myself for the post of president, and my message is always to stand as a correspondent for journalists as a first step to run for president.”

Al-Agouz said that her programme is based on restoring journalists’ financial and moral rights. “I am trying to make the value of the allowance EGP 2,500 and increase it periodically and it is stipulated in the law so no one can ever change it.”

Allowances, which currently stand at EGP 1,680, are amounts of money given monthly to journalists to improve their financial conditions as a majority are not receiving profitable salaries due to the profession’s financial struggles.

Some of the candidates running for board’s seat did not ignore the families of journalists who were killed as they were covering various clashes. Mostafa Abeedo, a candidate for the membership of the syndicate, asserted the necessity to care for the families of the killed journalists, and immediately execute their needs.

Many journalists were killed during the course of their work in order to convey the events taking place in Egypt since the 25 January Revolution in 2011, most notably “Ahmed Assem, Husseini Abu Daif, Mayada Ashraf, Habiba Abdel Aziz, and Ahmed Abdel Gawad.”

Also, journalist Samia Abu Al-Nasr, said it was necessary to communicate with the social affairs committee to provide a social pension for the families of the killed journalists.

The Press Syndicate membership is currently restricted to journalists working in print media and the syndicate’s law would have to be changed to allow the membership base to broaden. The last Press Syndicate elections were held in 2017 when Salama was elected as head.

Moreover, Amira Al-Adly, journalist from state-run Al-Ahram newspaper, suggested to conduct a survey amongst the members of the general assembly on the most pressing problems of the press and trade union work, and received answers from some 400 members, and said that she is willing to open a committee to follow the conditions and issues of female journalists.

She added that the most important features of her electoral programme will be divided into two axes, the first is service, and the main one is wages, by providing a minimum for journalists to afford a decent life, and working to raise the level of the medical project after the recent deterioration.

Candidate Yousef Ayoub, editor of the privately-owned newspaper Sout Al-Umma, said that in case he wins, he will double the cuts granted to reporters on the subway and railway subscriptions, and that he will demand to get discounts on Super jet tickets and mass transport companies for the benefit of journalists, and that he had received promises from officials to discuss services that could be provided to journalists.

Hisham Younis, editor-in-chief of Al-Ahram newspaper, who was a member of the Journalists Syndicate Council from 2011 to 2015, said “the press is facing a historic turning point that requires all members of the profession to join hands. The next period requires focusing on issues of legislation and arbitrary dismissals of journalists, which also requires a legislative amendment that allows institutions’ accountability which separates journalists, as well as the return of discipline.”

He also said that the issue of wages requires from the members of the general assembly and the elected president to forward the issue to the House of Representatives and the cabinet, to place a fair solution, pointing out that the union must go toward the establishment of investment entities to spend on activities, services, and emergencies.

Rashwan to meet with Al-Tahrir heads, journalists to discuss disputes