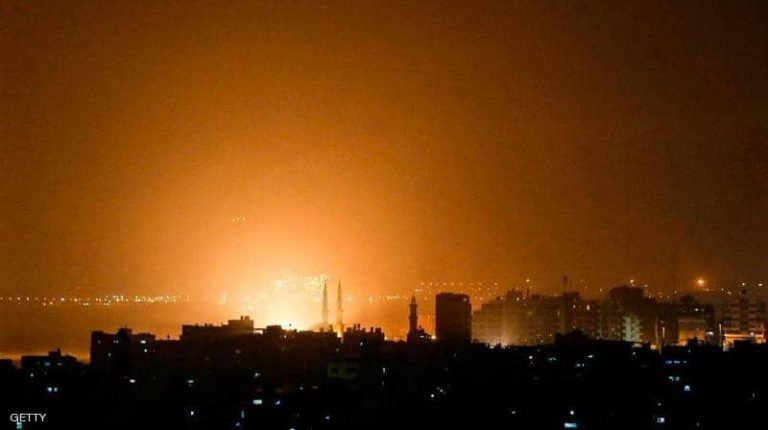 Israel said it struck 100 suspect Hamas targets on Friday night in Gaza Strip after four rockets were fired on Tel Aviv from the strip.

Four Palestinians were injured in the Israeli airstrikes, according to the Palestinian Health Ministry.

“Four rockets were launched from Gaza at Israel,” the Israeli army said on Thursday, adding that its “Iron Dome, aerial defence system, intercepted three of the rockets.” Israel declared that it targeted 100 “military sites” allegedly belonging to the Hamas movement across Gaza.

In a statement, Hamas condemned Israel’s offensive and insisted that it is not responsible for the rockets fired from the strip.

“Israel’s heavy bombardment on the Gaza Strip, targeting civilians, and shelling resistance facilities is a new crime added to the Israeli occupation’s criminal record against the Palestinian people,” Hamas said.

Furthermore, Hamas asserted that “the Palestinian resistance would never allow some Israeli leaders to exploit the Palestinian blood as a card to win more votes in the coming Israeli electoral race.”

Almost a year ago, Israel’s army and militant factions in Gaza exchanged fire in the heaviest flare-up since the 2014 Gaza war, as Hamas and pro-Iran Islamic jihad militants fired more than 50 rockets and mortars on southern Israel. No casualties were reported on both sides.