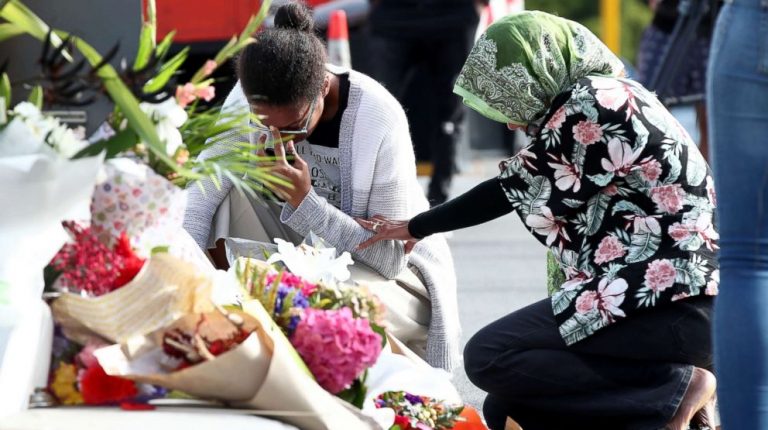 In one of the deadliest attacks in the history of New Zealand against civilians based on their religion, race, colure, or identity, 49 Muslims have been killed and 48 others were severely wounded when an Australian right-wing extremist opened fire on worshipers in two mosques during the Friday prayer in Christchurch city and livestreamed video of the attack.

The attacker, identified as Brenton Tarrant, was apprehended and appeared in court on Saturday over charges of murder. He has been described by New Zealand’s Prime Minister Jacinda Ardern as having “extremist views.” Three others were taken into custody in connection with the terrorist attack. All are Australians.

The terror attack drew huge reactions including anger and condemnation among world leaders who differently termed that attack. For New Zealand, Ardern condemned the mosque shooting saying it was one of New Zealand’s darkest days. “It is clear that this can now only be described as a terrorist attack,” Ardern told reporters following the attack.

According to the Small Arms Survey in 2017, residents in New Zealand own an estimated 1.2m firearms. There are no strict measures on ownership of military-style weapons as most firearms can be easily and legally sold on the internet. Meanwhile, Ardern vowed on Friday to consider banning semi-automatic firearms. “Our gun laws will change,” she confirmed.

About 1.1% of New Zealand’s population, almost 4.25 million people, are Muslim, according to the country’s most recent survey. The victims of the two attacks included refugees and migrants who fled the war and violence in their countries, seeking better living conditions and peaceful places. Egyptian, Saudi, and Jordanian nationals were among the casualties. Women and children were also killed or injured. Muslims and their supporters around the world criticised a few international media outlets or state leaders and politicians who considered the attack as an “act of violence,” rather than “terrorism”.

Some argue that far-right terrorism is not less dangerous or widespread than Islamic terrorism, such as the Islamic State. Jewish Russian journalist Leonid Bershidsky wrote in a recent column in Bloomberg that the number of violent incidents committed by the far-right is on the rise. “The Institute for Economics and Peace noted in its 2018 Global Terrorism Index report that the number of such killings increased from three in 2014 to 17 in 2017,” he added.

On Twitter, tens of thousands of users used the hashtag “#NewZealandTerroristAttack,” to pay tribute to the victims and criticise media outlets that used “act of violence” to describe the incident instead of “terrorist attack,” and the use of “shooter” rather than “terrorist”.

“This terrorist killed 49 Muslims, but the world media calls him ‘the shooter’ not ‘the terrorist’ because he is not ‘Muslim!’ A Muslim is the only one who is punished and called a ‘terrorist,’ but others are called mentally unstable. Why?” wrote a Twitter user Kashif Khan.

Another tweet by Adam Saleh read: “This guy is not just a ‘shooter’ as what the media is saying. He’s also a Terrorist. Terrorism has no religion.” Meanwhile, Eman Ali wrote: “He [the attacker] is not mentally sick, He’s a terrorist.”

Furthermore, Abdel Allah asserted, “Don’t call him a shooter, he is a terrorist. Terrorism doesn’t belong to any religion. Keep this in mind.”

Mark Pavelich tweeted: “The first victim of the Terrorist Attack in New Zealand is shown on the video greeting the gunman with ‘Hello Brother.’ Those were his last words. Love in the face of hate.”

Mariam Mostafa tweeted, “White Supremacy and normalisation of Islamophobia are the real monsters threatening humanity right now. Please, don’t feed the beast with your silence and SPEAK UP.” 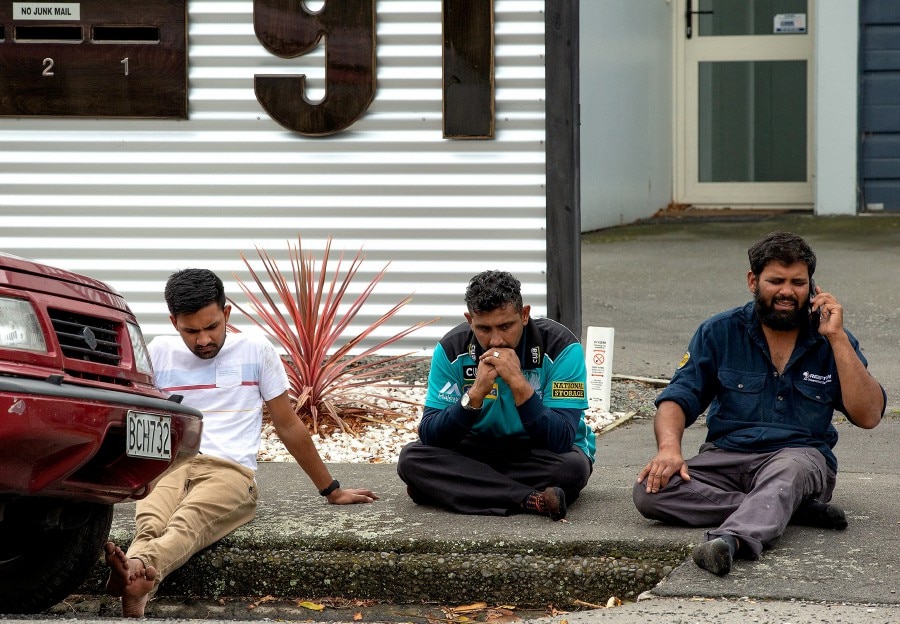 Max Abrahms, a professor of political science at Northeastern University in Boston, Massachusetts, and the author of Rules for Rebels: The Science of Victory in Militant History, tweeted shortly after the attack: “This is terrorism, Non-state actor. Civilian target and Political goal.”

“The terrorist who struck in New Zealand claimed to do it to oppose Muslims. Of course, the attack will have the exact opposite political effect. It will increase international sympathy towards Muslims and marginalise their fiercest political opponents,” Abrahms highlighted.

He noted that mass shootings in New Zealand are exceedingly rare. “The deadliest in modern history occurred in the small town of Aramoana in 1990 when gunman David Gray shot and killed 13 people following a dispute with a neighbour,” Abrahms articled.

Abrahms further tweeted that “the terrorist in New Zealand was very public-faced. He recorded the attack and left a manifesto. This will inevitably prompt questions about how much info the media should share to inform without incentivising the violent behaviour.”

Meanwhile, Shadi Hamid, a senior fellow and the author of Islamic Exceptionalism: How the Struggle Over Islam Is Reshaping the World, asserted in a tweet: “It’s not quite right to say the Christchurch shooter was ‘crazy, mad, insane,’ and certainly not thoughtless. Similarly, I was opposed to calling ISIS crazy, because that seemed a way to reduce the importance of what was happening, making it harder to confront the threat.”

Meanwhile, Egyptian writer Khaled Mansour emphasised the significance to describe what happened in New Zealand as a terrorist act, as such a description would open the doors for applying specific police procedures and laws and more restrictions against specific organisations or associations.

Egypt’s Foreign Ministry condemned the attack on Friday, describing it as “terrorist”. According to the Ministry of Immigration, four Egyptians were killed in the attack. They are Mounir Soliman, Ahmed Gamal El-Din, Ashraf AL-Morsi, and Ashraf Al-Masry.

Globally, the US President Donald Trump tweeted that he spoke with the Prime Minister of New Zealand regarding “the horrific events” that have taken place on Friday. “I informed the Prime Minister…that we stand in solidarity with New Zealand, and that any assistance the US can give, we stand by ready to help. We love you New Zealand,” Trump wrote.

The German Chancellor Angela Merkel also tweeted: “This is an attack directed against Muslims. It is also an attack on New Zealand’s democracy and an open and tolerant society”. 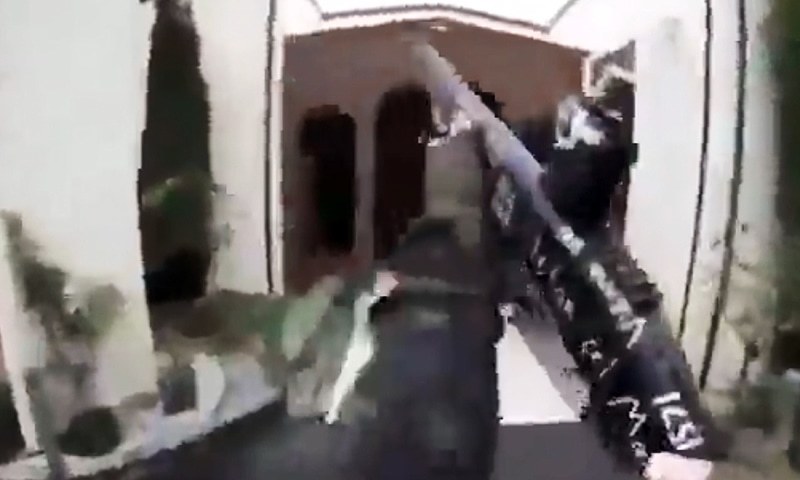 The terrorist appeared to use a Twitter account holding the name of Brenton Tarrant to publish a racist 74-page manifesto called “The Great Replacement”, in which he identified himself as a 28-year-old man born in Australia.

The attacker also apparently used Facebook’s live stream service to release a shooting video, which he ironically warned he would live stream before the attack. The video, which contained graphic footage, reportedly ran for nearly 17 minutes and showed part of the attack. It is believed to be taken from an action  camera worn by the terrorist. Copies of the video continued to appear on Youtube, Twitter, and Instagram over a few hours after the attack.

In a statement on Friday, Facebook said it removed the video and the account which published the content. “We’re also removing any praise or support for the crime and the shooter or shooters as soon as we’re aware,” Facebook stated.

The social media platform revealed that New Zealand police alerted them to the video shortly after the live stream commenced. “We quickly removed both the shooter’s Facebook and Instagram accounts as well as the video,” Facebook added.

Democratic US Senator Cory Booker, who is running for presidency, criticised Facebook’s slow response to the spread of the graphic content of the video. Booker said at his election campaign event that “tech companies have a responsibility to do the morally right thing.”

Booker added, “this is a case where you’re giving a platform for hate. That’s unacceptable, it should have never happened, and it should have been taken down a lot more swiftly.”