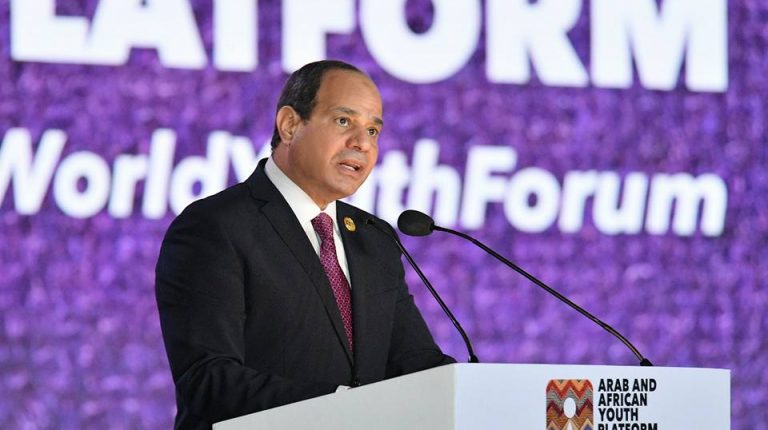 Egyptian President Abdel Fattah Al-Sisi has called for the formation of an Arab-African apparatus to combat terrorism and maintain regional stability and security.

During the closing session of the Arab and African Youth Platform in Aswan – one of the World Youth Forum Platforms – Al-Sisi called on the health ministry and other state bodies to launch a new initiative to scan 1 million Africans residing in Egypt for hepatitis C virus.

Concurrently, he instructed the cabinet and the ministries of education and foreign affairs to allow African researchers to access the Egyptian Knowledge Bank.

Meanwhile, he advised using media platforms and social media to correct the erroneous image of Arab and African relations.

Al-Sisi further called for preparing a paper, in cooperation with the Commission of the African Union (AU) and the General Secretariat of the Arab League, on the possibility of establishing a joint Arab market, and a fund for enhancing inter-country cooperation in the fields of electricity, railways, roads, as well as the counterterrorism apparatus.

During the platform, Al-Sisi met with the Chairperson of the AU Commission, Moussa Faki. The president emphasised “the significance of increasing the AU’s efforts to prevent conflicts and effectuate the AU’s policy toward reconstruction and development in post-conflict areas,” a Sunday’s Egyptian presidency statement read.

“This is to be adopted within a more comprehensive approach that is based on development, as an end and also as a means, in order to address the root causes of conflicts and to enhance states’ capacitates,” the statement added.

Furthermore, Al-Sisi expressed readiness to foster this proposal, in view of leading issues of reconstruction and development in post-conflict areas within the AU.

The first edition of the Arab and African Youth Platform kicked off on Saturday in Aswan. The platform involved several workshops, sessions, and roundtable discussions aiming to connect young leaders with top decision-makers.