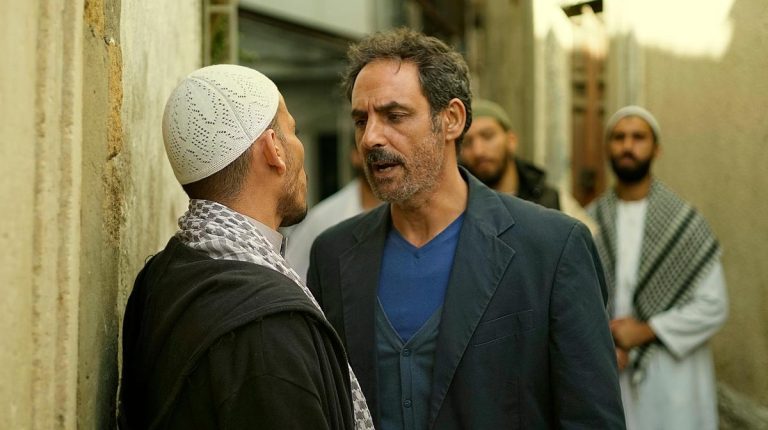 Fatwa, the Tunisian film, directed by Mahmoud Ben Mahmoud, and winner of the Golden Tanit in the Carthage Film Festival, can be considered one of the most important recent film productions in Tunisia in years. This is not only for its fine cinematic language, but also for the smart discussion of the current situation, with all its complexities in the country.

Fatwa depicts the story of Brahim Nadhour, who is a Tunisian man working in the field of tourism in France, and who returns upon the sudden death of his son Marwan.

Brahim was away from his son for a long time, and his wife, a secular writer and a politician threatened by a group of radical Islamists.

The police closes Marwan’s case as a motorcycle accident, but following the funeral, Brahim suspects that there is more to the story. He embarks on a journey trying to discover what happened to his son, where he lived and what his ideas were, in the meantime uncovering what happened to Tunisia as well.

Brahim discovers that his son was involved in the radical Islamist group, living among them in the old neighbourhood, leaving his mother who he considered as a non-believer.

As Brahim follows his deceased son’s path, he reaches an art school where Marwan supposedly studied. There he discovers that his son has left the place, after causing problems with his colleagues. Brahim also visits a studio, looking for the books his son read and the people he knew.

In one of the scenes, he meets the coffee shop manager, and asks him about the bar that was in its place. The manager takes him into an underground space, a hiding place from the radicals.

Brahim is told that he has raised his son “in a French way,” to which he answered that this may be the reason.

This line reveals a lot about the identity crisis Marwan has been going through: he was lost, so he searched for a mentor in the absence of his father–and the radicals became his answer.

Consequently, we discover that Marwan was not a one layered character and that is one of the perks of the well-written script.

The story is supported by the fine performance of Ahmed Hafiene, Sarra Hannachi, and of course Ghalia Benali, the Tunisian musician who proves in every new film that she can be a great actress too.