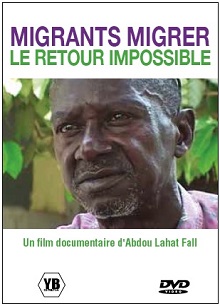 Senegalese filmmaker Abdou Lahat Fall and his camera act as investigators in his film Migrants Migrate: The Impossible Return, where he is provoked to raise questions on why many African migrants into Europe withstand the pain of being without jobs or a future and subject themselves to homelessness or being hunted by the police.

He is instigated to find answers to these questions when he witnesses the expulsion of a Senegalese civilian at the Charles de Gaulle airport in Paris. The film, which is an hour long, tries to answer several questions such as what keeps migrants abroad and what are they afraid of.

The film’s interesting concept is that it interviews several subjects from different ages and backgrounds, as well as people who settled in Europe and others who still dream to settle in Europe and live the European way of life.

In the film, we see undocumented migrants fighting to get official papers, which is the only way to find a job, receive medical care, find housing, or even enrol in universities. The act of getting papers is the sole goal for many refugees who arrive, alive, to Europe. Lahat Fall delves into the lives of African migrants who travelled from Gao, then to Algeria, and then to Libya, and later to either France or Italy. He touches upon simple stories that tell a lot about how they live. One story, although on the surface may seem trivial, says a lot: that migrants cannot take the bus or the metro as they can get caught, leaving them with the only options of walking or biking.

One very interesting answer that Lahat Fall found, which unfortunately he did not really expand on, was the fact that migrants who fail in securing a decent life and a steady income do not go back home, fearing shame and alienation from their societies. Lahat Fall argues, through various interviews, that some of those who go back go crazy when they realise that they went through all that trouble and danger for nothing.

Lahat Fall brings an example to this: Techkey, who is the main character of the film, is a man who spent about 20 years in France and woke up one day to find himself being forcefully deported to Senegal. The director met Techkey and interviewed him and decided that to track his family. However, in the process Techkey dies, but Lahat Fall continues the journey of trying to track his family.

The film argues that there are a lot of Techkeys, and that is the reason why the director travels to France to meet other migrants and ask them why they refuse to go back even though they are living dangerously and face deportation at any minute.

He tries to understand the mentality of these people only to find that they themselves, after years of ill treatment and living in the streets and severe conditions, acquire the conciseness to say that what they hoped to happen in Europe was a misconception. They understand that they will never be Europeans, in terms of rights and opportunities, not because they are Africans but because of the increase of racism and the greed of some business owners who would like to hire cheap labour.

The filmmaker is trying, through the interviews, to say that Europe is not what it used to be, it is no longer the place where you work as a dishwasher for a while and get the nationality after two years. But still those who say the previous words will not voluntarily go back, as they fear returning to their family without bags of gold and money.

Migrants Migrate: The Impossible Return is important in the contemporary context with the rise of the extreme right wing and also the waves of immigration into Europe coming from Africa.

#MeTwo: To be or not to be German enough