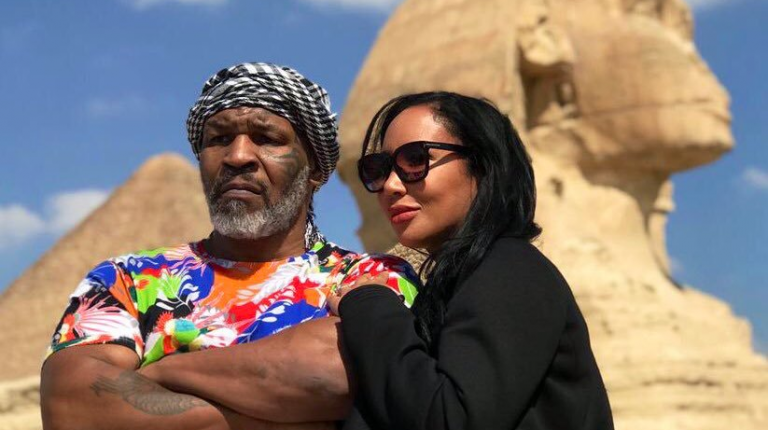 Impromptu moments of him riding a camel while roaming the pyramids holding his wife Kiki close by, with the sphinx’s giant bricks in the background–these were some of the pictures which introduced legendary Mike Tyson’s trip to Cairo.

The famous boxer landed in Egypt earlier this week, but it was not until Sunday night when the pictures were published announcing his arrival.

Tyson came to participate in the Egyptian film ‘Hamlet Pharon’ (A Pharaoh’s Campaign), produced by Mohamed El Sobky, in which he will co-star alongside Amr Saad, and the young radiant female actress Ruby.

Shooting is scheduled to start on Tuesday. The film is written by Karim Hassan Bashir, and will be directed by Raouf Abd El Aziz.

‘Hamlet Pharon’ tells the story of Yehia (Amr Saad) who owns the largest, and most widespread assassins’ network in Egypt. Known as ‘Pharon’ (The Pharaoh), Yehia finds himself stuck in a long journey from Egypt to Syria in order to free his lover.

Tyson, 52, is a former professional boxer who competed from 1985 to 2005. He joined the international records when he won the record of the youngest boxer to hold the title of a heavyweight at 20-years-old.

Nicknamed ‘The Iron Man’, Tyson took part in a total of 58 fights in his professional career. Fifty of those he won, 44 being by knockout. In the fights he did not win, he officially lost six, and two fell into the category of no contest.

The heavyweight boxer was accompanied by some of the film crew on his tour to the Giza Plateau which was the first outing he started his short visit in Egypt with.

The film’s shooting period was not clearly announced. The film witnesses Tyson’s first participation ever in an Egyptian film. He also participated in few Hollywood films, including The Hangover, (2009), Ip Man 3, (2015,) and The Hangover Part II, (2011).

Mayweather wins ‘Fight of the Century’

Democrats unseat Republicans in NY, Virginia in US voting