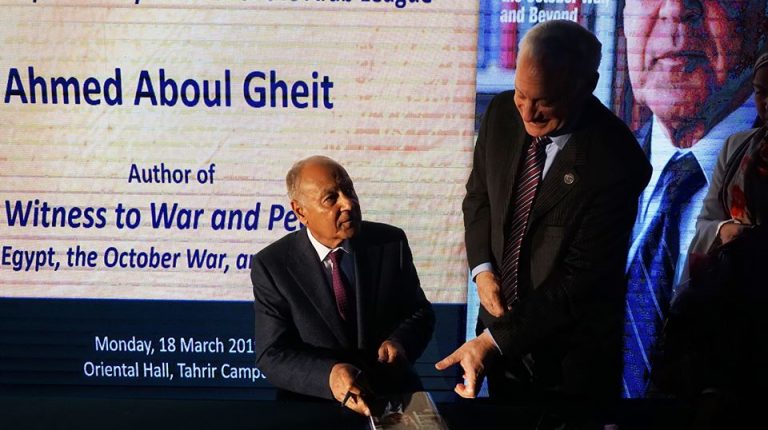 “This is not a story about my journey, this is a book about Anwar El-Sadat’s epic in heroism and wisdom,” said Egypt’s veteran politician Ahmed Aboul Gheit at the introduction of his translated English book, Witness to War and Peace: Egypt, the October War and Beyond, which is published by the American University in Cairo’s (AUC) Press. 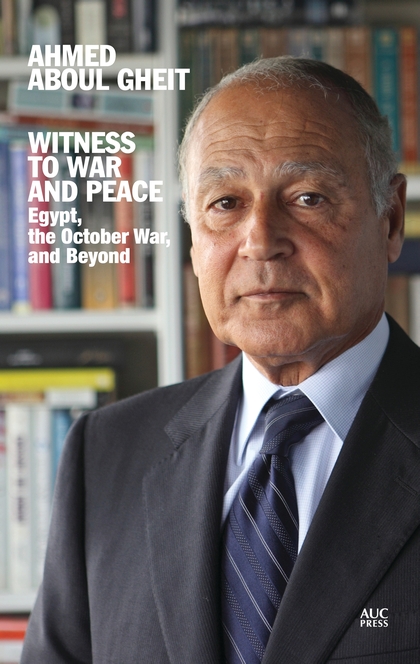 After years of the published Arabic version, which takes readers behind the scenes of Al-Sadat’s decision of the 1973 War, and the subsequent Camp David Accords, the AUC Press decided to give English readers a chance to dig into Egypt’s recent history which reshaped its status and played a significant role of where it currently stands on the international map.

Aboul Gheit is a veteran diplomat. From a very young age, he worked in critical positions which allowed him to witness each and every political communication between Egypt and other foreign countries. A few years later, he was elected as the secretary general of the Arab League. He previously served as Egypt’s ambassador to Italy and as Egypt’s permanent representative to the UN. In 2004, he was appointed as Egypt’s Minister of Foreign Affairs–a post he held until 2011.

In his memories, Aboul Gheit takes readers back in time to a very critical moment which starts on 5 October 1973, one day before the huge warfare, when he was working at the National Security Consultancy.

“This book is not just about chronicling the history by a member who personally witnessed all the negotiations’ details, read all the official documents exchanged between Egypt and the concerned countries, and furthermore took a part in writing them, it is more about honouring the figures involved during that era, who passed away before having the chance to document it,” Aboul Gheit said in his speech.

“This is not just a good book, it is an important book that tells the details of Al-Sadat’s decision of the war and the peace treaty afterwards,” said AUC’s President Francis J Ricciardone.

Speaking of the having the AUC Press publish the book, Ricciardone told Daily News Egypt that as a former colleague to Aboul Gheit, when they discussed the offer, it was met with warm welcomes from the AUC’s side in order to open a window for those who do not speak fluent Arabic to learn and know about Egypt’s history, especially regarding such a critical matter like the 1973 War and the peace treaty afterwards.

“I think for anyone around the world who deals with Egypt, whether scholars, businesspersons or even particularly diplomats who need to understand this country, they need to have access to authentic living Egyptian witnesses to Egyptian decision-making. [That includes] how Egypt sees the world, [views] modern history, and then explains this decision-making,” Ricciardone said.

The AUC president further explained that the reasons behind publishing the book in English by the AUC Press were that the 1967 period, until the 1973 War was a transformative era of war and peace in the history of the whole region that is described in “too little writings by Egyptians in English.” “There are several memoirs in Arabic, but for most foreigners, to have it in English with really good translation makes really important information available,” he added.

The book is divided into two main sections: a witness to the war, and a witness to the peace. Throughout these sections, the meetings’ details which were held by the high board of the armed forces are mentioned. It portrays an image which includes the reader, making him feel like one of the attendees.

“I am blessed with a very strong memory, I rarely forget anything. In this book, I mentioned 95% of the details which occurred at the time, while the one thing that kept me from sharing the other 5% is that they cannot be shared with the public,” Aboul Gheit declared.

Throughout the sections of the book, Aboul Gheit recalls Al-Sadat’s decision of the 1973 War, quite aware that Egypt’s army is not well-equipped, and as others clearly declared, “much weaker than the Israeli one.”

“He took the war decision in one meeting, while depicting the exact war steps, the Egyptian army could do nothing more. These steps included taking them over via a surprise element by destroying the Bar Lev Line, possessing the first attack against the enemy, waiting for their response, and immediately stopping the line of fire,” he added.

Aboul Gheit added that in his book, he portrays how the man of peace and war was quite aware of the steps of the war, and they were previously delineated in detail by the armed forces.

Despite the huge risk at the time, he asserted that if Al-Sadat had not taken that risk, Sinai would have been probably like the Golan Heights nowadays, adding that these actions included the peace treaty which was met with a mass wave of anger and accusations of betrayal and wasting the blood of Egyptian soldiers who died in the war.

“Forty years later, I still sometimes wonder if Al-Sadat had not done what he did-putting in mind everything that politically happened afterwards-it leads me to believe that Egypt would otherwise not have regained control over its lands,” Aboul Gheit explained.

Despite declaring that the US was with the Israeli side during the war, Aboul Gheit clearly stated that not a single word was changed from the book while being translated from the Arabic version into the English one.

The book is the start of the AUC Press’ publishing series of Aboul Gheit’s memoirs. He announced in his speech that his second book, Shahadty (My Testimony) is to also become published in English by the end of this year. Throughout his second book, he will recall his journey as Egypt’s Minister of Foreign Affairs.