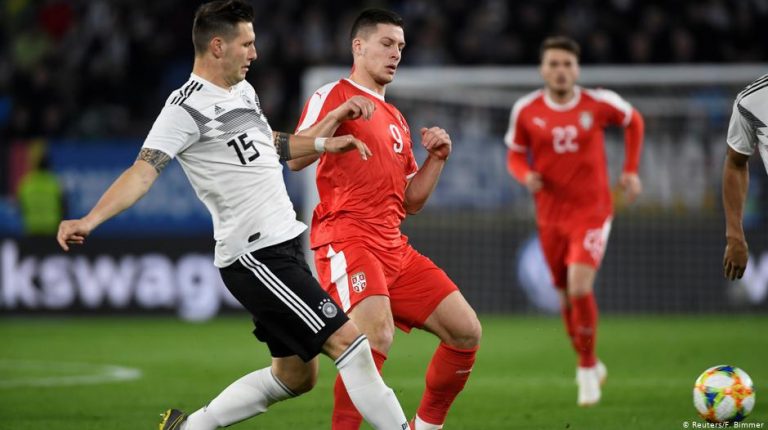 Luka Jovic is on a roll. The Eintracht Frankfurt striker scored against Germany in the 1-1 draw on Wednesday. DW spoke to the in-demand Serbian international just after the game.DW: Luka, you scored very early in the first half to give Serbia the lead. How did you feel on the pitch against all these Bundesliga players?

Luka Jovic: It was a difficult game for us. Germany have so many fantastic players. They’re at the highest level. Many of them can make the difference on the pitch. We are happy with the result. Now we can focus on the Portugal game in a few days. We have to give our best again to get the three points.

DW: In the first half, Serbia seemed to cause problems for German, but then it changed. What happened in the second half?

Jovic: Difficult question. Germany are a strong side. And when Marco Reus came on, we didn’t know what to do. For me he’s the best player in the Bundesliga at the moment, moving between the lines and creating so many opportunities. We couldn’t really cope with his pace when he ran towards goal.

DW: What was it like to play against this new German defense? Niklas Süle and Jonathan Tah are strong, tough defenders …

Jovic: Well, it was tough. I know both of them from the Bundesliga and they might be the best defenders in the league. Especially when it comes to headers, they are really strong in the air. It’s difficult to win any duels, especially for me since I’m not that tall. And later on we played too many long balls. The most important thing is that we didn't lose. A draw is a good result for us.

DW: How do you see the development of the German national team after the departure of three World Cup winners in Mats Hummels, Jerome Boateng and Thomas Müller?

Jovic: Germany have a young side – a bit like us. I think they did very well today. And in the future we will see what they’re really capable of. They are so many good players in the Germany squad.

DW: What does the future hold for Serbia? Now you face Portugal in the European qualifiers…

Jovic: We travel to Portugal with confidence. Of course, we want to win our first game in the qualifying campaign. It’s the first matchday, so everything is possible. But we definitely have to reach our full potential.

The interview was conducted by Nemanja Rujevic and Pascal Jochem.