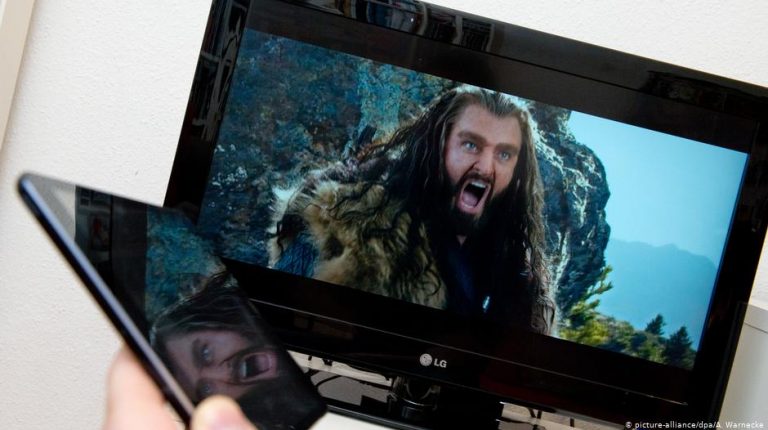 On Monday, the tech giant is set to unveil a new video-on-demand platform with a string of much-awaited original shows. Apple no longer wants to just sell devices, but put its original content on them too."It's show time," proclaimed the invitation to the launch of Apple's new streaming video service. Sent to dozens of Hollywood executives, producers and actors ahead of Monday's announcement, the notes have heightened speculation about the tech giant's ambitious plans to take on Netflix with a $1 billion+ (€879 million) investment in original entertainment.

One of the first to offer individual paid-for videos on its iTunes platform in 2006, Apple lags by several years in the launch of its video subscription service and enters an already crowded market. Netflix, meanwhile, has more than 146 million subscribers globally and is now in more than half of all US households, while Amazon Prime is hot on its heels.

Huge US television and movie studios Disney and Warner Media (formerly Time Warner) are also due to launch streaming platforms later this year to showcase their extensive libraries, while many traditional US and global channels stream much of their content for free.

Apple has been forced to play catch-up as growth in demand for iPhones and iPads has stalled. Industry analyst Tony Gunnarsson from London-based consultancy Ovum noted that Apple also incorrectly bet that iTunes would replace DVDs with individual collections of video content.

"Consumers did not take to building virtual movie libraries, and although Apple made a lot of money and became a very important partner for Hollywood, Netflix came along and became this huge worldwide phenomenon," he told DW.

Gunnarsson doesn't see Apple mimicking Netflix's subscription model entirely; instead, he sees the iPhone maker following Amazon Prime, the second-largest streaming player. "Amazon has been cheeky by withholding some movies and shows from the Prime subscription. You still have to rent them at 3.99. It has been very successful and has begun to take market share from Apple."

He thinks Apple will introduce a hybrid offering with a degree of subscription content from third parties, alongside its transactional store where you can buy individual movies and series, boosted by access to its much-rumored original shows, which could be offered for free to iPhone and iPad users who upgrade their devices. Some reports suggest Apple has already finalized deals to offer shows from CBS, Viacom, and Lions Gate Entertainment Corp's Starz.

Analysts see few negatives around Apple's late entry into the streaming segment, at a time when the tech giant is increasingly relying on services to boost profits. Apple Music, iTunes, and the App Store already make up almost 15 percent of the tech giant's annual revenues — some $37.2 billion in 2018.

'They own the entire ecosystem'

"Apple is a very different company to Netflix," said Dan Rayburn, principal analyst at the New York-based research firm Frost and Sullivan. "Apple is the hardware, the store, the web browser, and Apple Pay. They own the entire ecosystem. So they can bundle differently on their platform, and they can also use content as a way to drive revenue from other services. That's not something Netflix can do," he told DW.

Netflix has a considerable debt burden despite its almost decadelong head start and continues to burn through cash. Although it made $1.2 billion in profit last year, it spent more than 12 times what Apple is initially spending on dozens of original shows and is expected to fork out an extra $15 billion in 2019, US entertainment magazine Variety reported in January, citing financial analysts.

"Look at how many Netflix shows get canceled after one year. It's a risky business trying to figure out what consumers like at any given time and how much money to you're going spend to produce it," said Rayburn. He noted that Apple tested the waters with shows like Planet of the Apps and Carpool Karaoke, which he said drove subscribers to Apple Music. Rayburn thinks Apple will "benefit from a lot more consumer usage data from other players as to what type of content works and what doesn't."

Apple's investment has already surpassed $1 billion on what industry pundits say are more high-quality, mass appeal shows from Sixth Sense director M. Night Shyamalan, Steven Spielberg and Oprah Winfrey. More than 10 of Apple's original series have already wrapped up filming or are near completion, the New York Times reported. None of them will be ready for the US launch, though — due in the next month or two. International viewers may have to wait around a year for their localized version.

Apple's move into content could be another nail in the coffin for traditional TV players —those public broadcasters, cable and satellite networks and commercial broadcasters that have already lost market share to the all-inclusive streamers, particularly among millennial viewers. Long-established TV platforms remain popular with older viewers, but Gunnarsson says there are even signs that their habits are changing.

"Streaming is not just dominated by the under 30s or even the under 50s. About a third of over 50s have it, so it has become truly mainstream," he said.

A positive note for legacy broadcasters is the arrival of another major player to whom they can resell their content libraries. HBO and Showtime, alongside sports rights holders the NBA and Major League Baseball, are already premium add-ons for Amazon Prime subscribers in the US, while public broadcaster ZDF, Eurosport and several movie rights owners offer similar bundles in Germany.

In Germany, for example, Apple's entry could further fuel the revival of local original productions, which Florian Kerkau, a partner at Berlin research firm Goldmedia, said had ground to a halt before streaming services arrived.

"The private TV channels had just about stopped producing original content and just broadcast American movies and series. This has changed completely. The demand for German content has increased so much that broadcasters are desperate for local content."

TV's not dead, it's changing

Despite their decline, the latest TV industry research points to a huge overlap between linear TV platforms and the new streaming services, indicating that the appetite for quality video content remains strong.

Media research firm GfK MRI found last year that nearly three-quarters of US consumers still have cable, satellite and telco TV and plan to keep it – even 58 percent of millennials remain loyal to traditional TV services.

"More than half the subscribers have both, and many are stacking several streaming subscription services on top of that too," said Gunnarsson.

Apple has reportedly set a target of 100 million streaming subscribers within the first five years of launch which could add $7 billion to $10 billion to its annual revenues, according to a report earlier this month by Los Angeles-based Wedbush Security analyst Daniel Ives.

Ives hinted that Apple is so serious about its foray into streamingand original video content it may start looking for production studios to acquire to help streamline the production process.