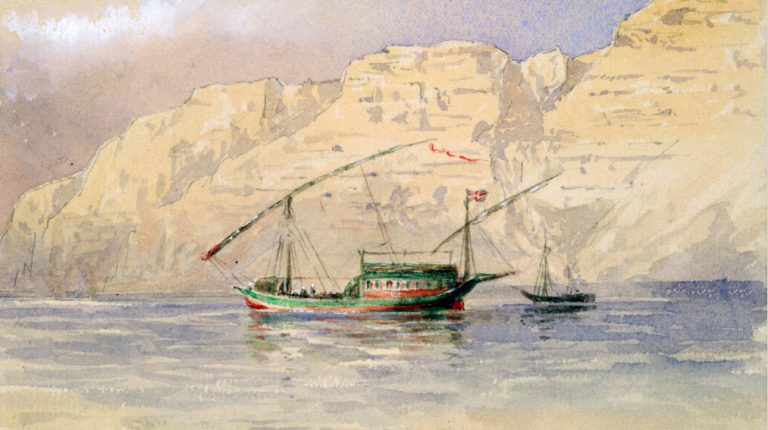 For thousands of years, we have been travelling north and south the river Nile, in various different vessels, ranging from pharaonic papyrus reed vessels to modern day 7-star luxury cruise boats. 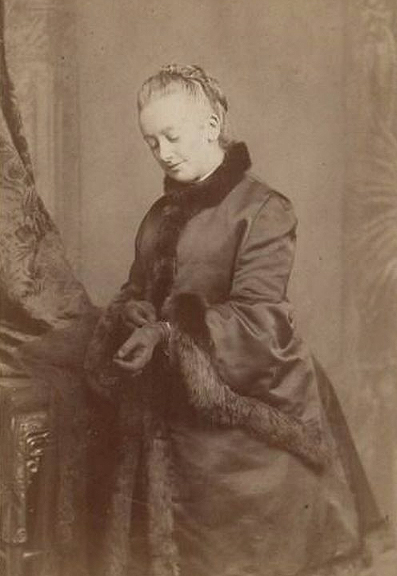 The changing vessels throughout history have primarily changed the length of time taken to reach destinations, and, by definition, the type of experience we have. A week-long Nile cruise on a luxurious sailing boat from Cairo as far as Abu Simbel, stands in contrast now to the 1880s passage on a dahabeya which would last months–not days–lending the journey experience a meditative aesthetic of the dahabeya, which was changed forever by modern steam boats and luxury cruisers. “The sensing and stretching of time was replaced by a necessity for a condensing of it,” says photographer and dahabeya director Karina Al Piaro.

For 30 years, Al Piaro’s life has been mostly spent between London and Egypt’s Nile river. Daily News Egypt interviewed Al Piaro to find out more about dahabeyas and her role as director of one of the eldest vessels remaining in existence, the transcript for which is below, lightly edited for clarity:

Can you please tell us what exactly a dahabeya is?

A dahabeya (Arabic) means a golden boat. Essentially it is a long wooden lateen large triangular sailed passenger craft, with two masts traditionally painted fully in white. These vessels are found exclusively on the Nile in Egypt, and were most ubiquitous for half a century between 1830-1880, significantly impacting the subsequent trajectory of the Nile heritage of that era and beyond.

After more than a century of silence, a renaissance of the dahabeya took place with a 21st century revival borne of the desire for a return to a deep heritage memory, allowing access to more contemplative states that ethically align with ecological journeying. It cannot be denied, that the sense of sensorial connection experiences with the Nile river is unsurpassed on a dahabeya, berthing anywhere on the river, at sites normally completely inaccessible to modern cruisers.

The classic dahabeya may appear to be an apotheosis to the modern cruiser, and these antique wooden vessels are in fact steel flat-bottomed, designed logistically specifically for river, not sea, use. The huge sail area also means the vessel can sail with ease in the lightest of breezes.

All dahabeya vessels that we see today have been universally crafted on classical prototype designs, and would have come from the ship yards of 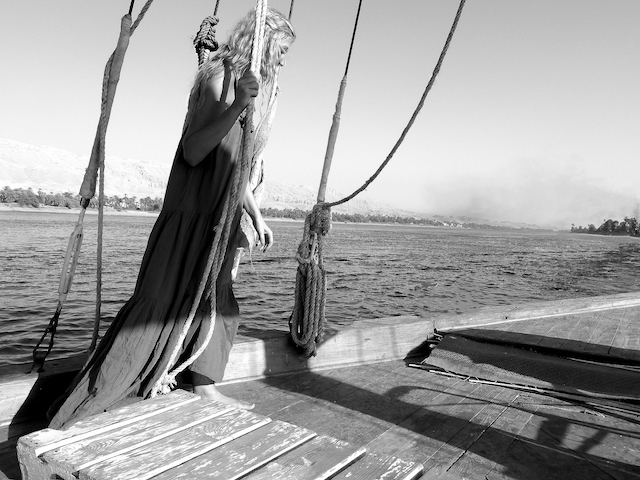 Britain, but the prototype vessel parts were put together later on the Nile in Egypt.

In its most basic form and structure, the dahabeya exhibits a design lineage that aligns smoothly with the shallow bronze tinted barges used in the pre-1800s medieval times by Muslim kings and nobility.

Also, references to gold itself go back further than this: the dahab (Arabic for gold) of the dahabeya may also refer to what is referred to the dongola decoration on the vessels in their etymology, an affirmation of the culture on a deep Nile heritage reaching Dongola itself in the southern most reaches of Nubia, between the Third and Fourth Cataracts on the Nile–known to be one of the main centres where the ancients obtained gold.

Today a handful of authentic early to mid-1800s dahabeyas exist, one of which I am extremely honoured to be able to call part of my personal heritage on the Nile, as a director for almost two decades. The vessel I direct was lovingly restored to its former glory at the turn of the 21st century and stands as a masterpiece of 1800s Nile heritage presently. Originally owned by Farid Al-Atrash, this rare authentic vessel exists in contrast to other contemporary vessels.

Modern duplications of the original dahabeya aesthetic currently dwell on the banks of the Nile, mostly berthed at ancient Thebes, the modern city we know today as Luxor. None, however, can arguably compare in nuances; the undeniable, unmistakable finely-tuned craftsmanship that even the untutored eye can observe, in the detail and subtle curvature of its white-panelled ceiling, and the soul that speaks a thousand stories within the vessel.

Can you tell us about your professional journey as a female photographer, and why the Nile?

My father gave me my first camera. I had until that moment dreams of being a painter; a dream that was subsequently eclipsed by the phenomenal quality of light that is the Egyptian sun. Vast varnished canvases, charcoal, and the acrid smell of brushes steeped in turpentine became quickly replaced by seemingly magical, transformational hours of alchemical processes in darkrooms, of endless rolls of negative film, of silver halides and the golden light on the swirling waters of the Nile. For it would be these repeated pilgrimages to the mighty river in Upper Egypt at the turn of the 21st century, based often on a newly restored historical 1800s dahabeya, as a female dahabeya director, with my camera, that I would truly galvanise the process of mastering my craft.

It was to become, and still is a time, of what I call self-realising through light writing; as a Nile heritage through a sense of revelation expressed on a white boat once owned by kings and nobility, of destiny through destination .Until this time, it has rarely been expressed that the early years of the pioneering of photography, )Greek: light writing) the visual technology that we know today, was fully realised as a genre with a purpose beyond the merely reproducible and observational qualities in the mid to late1800s, directly as a result of the actions and observations of a female pioneer journeying on the Nile. 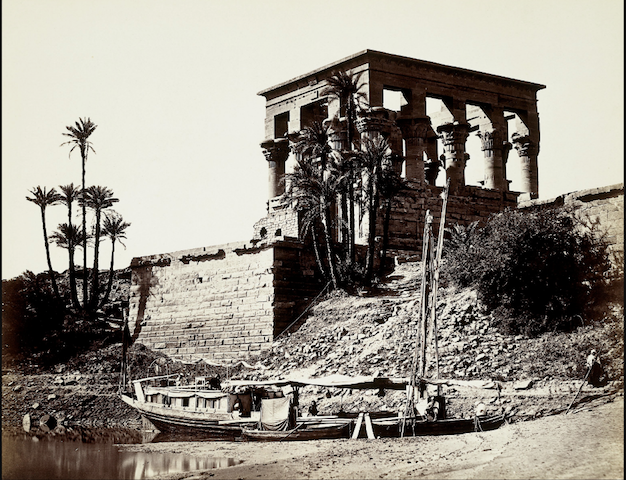 My personal Nile pilgrimage with my camera on the dahabeya became a 21th century intersection in time, where the past and the present were intermingling and diverging. I was picking up the torch of 1800s transformational journeys undertaken by a handful of pioneering women; women that had come before me well over a century before. The dahabeya rapidly became the preferred modus operandi of the predominantly male exploratory pioneers including photographers and writers of that time; the most celebrated and studied accounts are still to this day predominantly those of explorer and bounty hunter Giovanni Battista Belzoni, photography pioneer Francis Frith, and the celebrated writer Gustave Flaubert.

In contrast to the highly celebrated objective realism of male accounts of the 1800s Nile journeying, less visible but arguably equally powerful rare female memoirs from that time speak now to us of a significantly reflective style and sensibility, leading ultimately to a transformative spiritual awakening, and of a call to action on disembarking. The dahabeya journey presented for women of this time an unequivocal embarkation into a terra incognita of the feminine previously unexpressed without restriction and without boundary; of contemplative meditative details felt through female eyes borne of journeys lasting months not weeks or days. These were in fact hitherto unforeseen expressions of a female consciousness during an era when women were mostly written out of, side-lined, or simply forgotten from public narratives.

What do you think the journey from Cairo to the furthest reaches of the Nile signified for the 1800s female protagonists we are discussing here?

Reflecting on the memoirs and later achievements of the 1800s, for women that journeyed on the Nile, the dahabeya represented that unchartered, unfettered otherness, not only of an external reality, but an internal one–but a particularly female one.

Their accounts from that time speak to us now of a more reflective sensibility leading to a transformative spiritual awakening and of a call to action on disembarking felt through female eyes.

Florence Nightingale speaks frequently of visions and of a spiritual awakening on the Nile, “Egypt is beginning to speak a language to me” Nightingale said.

Another notable woman journeying at this time on the Nile as far as the Fourth Cataract was Amelia Ann Blanford Edwards, who toured Egypt in the winter of 1873–1874, discovering a fascination with Egypt and the Nile culture. Journeying southwards from Cairo in a hired dahabeya, the Edwards party sailed as far as Philae and ultimately reached Abu Simbel, where they remained for six weeks. Their boat joined a flotilla with another female English traveller, Marianne Brocklehurst, also travelling with a female companion. Brocklehurst and Edwards remained friends. Brocklehurst later supported her with the establishment of the Egypt Exploration Fund in 1882, which still stands today as The Egyptian Exploration Society, a powerful benevolent presence that continues to influence strongly the careers and contemporary trajectory of the realm of Egyptology, as it did in the late 1800s.

Edwards‘s vivid description of her Nile odyssey entitled A Thousand Miles up the Nile in 1875, enhanced by her personal illustrations, became an early travelogue that was published as an immediate best-seller. Edwards‘s journeying made her increasingly aware through her observations over many, many months on the Nile of the urgent need to encourage action to conserve ancient monuments and sites of historical significance on the Nile. She set out through a public awareness campaign and scientific endeavour, becoming a tireless advocate for research and preservation of significant Nile heritage. Edwards‘s presence and actions may have seemed radical for her time, but the content of her memoir accounts and later actions reflect, at root, a sympathetic benevolent curiosity and positive intention which seeks to understand and not to judge.

Echoing the late 1800s transformative journeying of Edwards‘s and of Nightingale‘s on the Nile, my very early 21st century journeying with my camera began also as a personal pilgrimage. I accepted this calling as an honourable one, embarking on a dahabeya as one would a pilgrim sensing immediately on disembarking, just as my predecessors did, that the dahabeya passage on the Nile is indeed a very special calling and is potentially a metamorphic, life-changing undertaking.

Early monochrome photographs by Francis Frith of that time, began to emerge, and one stood out-amongst all others-a photograph of a mysterious wooden vessel aside a temple.

It was an image that had been taken by him in 1867 on the Nile over a century earlier, and the vessel was in fact an early dahabeya that was berthed meditatively at the Temple of Philae. The vessel had in fact astonishingly been used as the photographer’s portable darkroom; I was essentially restoratively continuing this vision.

Today I am continuing the creation of my 21st century legacy project on the Nile visually with my camera as the catalyst for my aspiration also to revive the dahabeya as a space; a locus of significant Nile heritage value, in the contemporary realm of hosting and inspiring experts and masters in their fields to gather, exchange, create, and to transform.

The mighty lifeblood of Egypt seems to revive all those who journey across it. The ancient Greek historian Herodotus was right when he called Egypt, “the gift of the Nile,” it would seem.

Tourists are still finding their way to Dahab