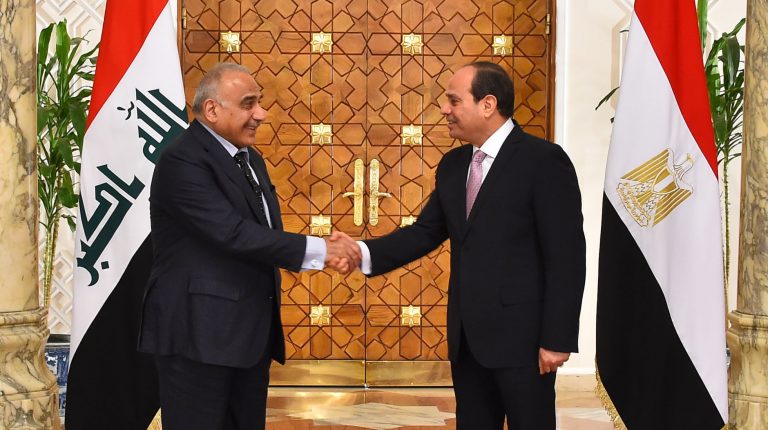 Egyptian President Abdel Fattah Al-Sisi asserted his keenness on enhancing the Egyptian-Iraqi relations during a joint press conference on Saturday with Iraqi Prime Minister Adil Abdul-Mahdi in Cairo, according to the Middle East News Agency (MENA).

Al-Sisi praised Abdul-Mahdi’s visit to Cairo, noting that it has a significant indication as it is the first official visit for the Iraqi politician since he took office.

Furthermore, Al-Sisi expressed his deep condolences to the victims of the Iraqi ferry’s accident in the city of Mosul, in which more than 90 people died including women and children.

During the press conference, Abdul-Mahdi said that Iraq confronted terrorism, emphasising that terrorism is not just terrorist groups as it is an organised ideology which has to be eradicated.

Furthermore, Abdul-Mahdi clarified that Iraq is trying, with the help of its sister countries, to rebuild the country in order to offer its people better future.

Before the press conference, both leaders held bilateral discussions on enhancing joint cooperation and topics of mutual interest.

Abdul-Mahdi arrived in Cairo on Saturday on a two-day visit to partake in the Egyptian, Jordanian, and Iraqi summit which will be held on Sunday in Cairo. The summit is expected to address regional issues of common interest and boost corporation. It also aims to enhance the joint Arab efforts in counterterrorism, ahead of the Arab League Summit at the end of March.

Meanwhile, the Jordanian Foreign Minister, Ayman Safadi, arrived in Cairo on Saturday, while Jordan’s King Abdullah II is expected to arrive in Egypt on Sunday morning.