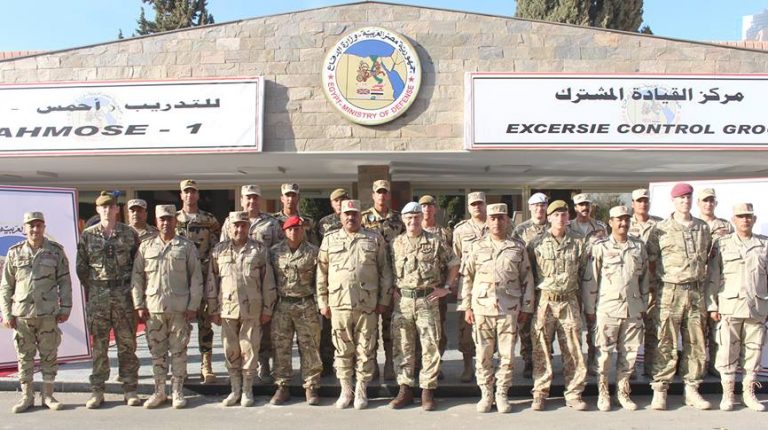 Egyptian and British armed forces continued on Friday the joint military drills dubbed ‘Ahmose-1’ which kicked off earlier this month at the Mohamed Naguib Military Base in Alexandria.

Major-General James Illingworth, commander in chief of the British army in Cyprus, inspected the current exercises on Friday, an Egyptian army’s statement said.

The exercises include conducting lectures to exchange expertise and practical training on different missions such as nullifying explosive devices and using the latest technologies.

Furthermore, the two countries’ troops are being trained to work under different circumstances. The exercises include military operations, such as the raiding of buildings, and installations controlled by terrorist groups, the statement added.

The drills aim to enhance mutual cooperation in order to confront challenges and threats as well as maintain regional security and stability.

The Mohamed Naguib Military Base, located in El-Hammam city west of Alexandria, is one of the biggest of its kind in the Middle East and Africa.

Seeking to enhance its military defence, Egypt is keen on conducting regular naval drills with its sister countries in order to combat terrorism and secure its borders.

Earlier this month, the Egyptian armed forces and the French air and marine forces carried out joint drills aimed to enhance military cooperation between both countries. The drills also included Egyptian and French special forces.