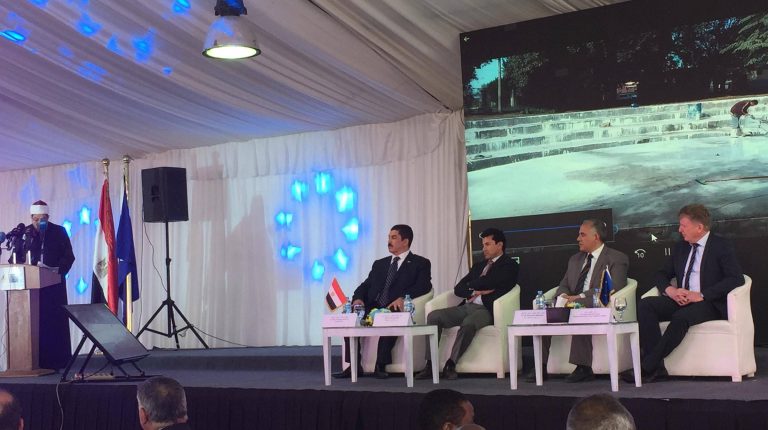 Minister of Irrigation and Water Resource, Mohammed Abdel Aty, stressed on Saturday that Egypt is on the brink of water scarcity. He called on people to be “more concerned” about the issue.

During the opening ceremony of the World Water Day, Abdel Aty said that this “concern” will “push us to work on solutions for the crisis” in order to avoid a crisis similar to what had happened in South Africa recently. South Africa faced a serious water crisis and it was about to reach “day zero” of water.

The minister clarified that climate change will negatively affect Egypt’s underground water reserves in the Nile Delta. He noted that the country is working on establishing desalination projects to cope with the crisis, stating that “Egypt will become the biggest country in water recycling globally,” clarifying that the budget of Egypt’s water projects reached $50bn.

Abdel Aty said that the strategy of his ministry is based on four objects: enhancing the quality of water, decreasing water consumption, developing water facilities, and providing a suitable environment for integrated water resources management.

In his speech during the conference, the EU ambassador to Egypt, Ivan Surkos, said that the world is facing several challenges regarding water security due to the high population growth and climate change. He noted that Egypt is one of the most affected countries of this crisis.

Surkos announced that the EU will launch a new programme for supporting water security in Egypt with a €120m in funds. The new programme-which will be launched by the end of the year-aims to support Egypt’s sustainable water management.

Egypt’s water per capita will be decreased by 20% within the coming 10 years to reach 500 cubic metres per year, which is lower than the international water per capita level. This will affect people’s lives and has negative impacts on security and stability, according to the EU ambassador.

Surkos said that during the past 10 years of cooperation between the EU and Egypt, the EU offered Egypt nearly €450m through 17 programmes, leveraging funds of nearly €2.2bn. The EU investments in infrastructure included working on almost 6,000 km of water and wastewater networks, and nearly 70 water treatment plants.

EU investments helped in providing more than 550,000 temporary jobs, and nearly 18,000 permanent jobs. The programmes served nearly 14.5 million people in 12 governorates. Most of the EU programmes were implemented in rural areas.

Mamdouh Raslan, head of the Holding Company for Water and Wastewater, said that the company is a main partner in the campaign for saving water, in order to establish new networks in the neediest areas.

Raslan noted that the drinking water subsidy is divided into three social segments. Citizens pay only 65 piasters for each cubic metre of water, while it actually costs EGP 3. The company is working with a number of ministries to hold awareness campaigns.

The Minister of Youth, Ashraf Sobhy, and Alaa Abdelhaleem, governor of Qaliubiya – where the conference was held – attended the opening ceremony.

A week ago, Abdel Aty said that Egypt’s per capita share of water is 600 m3/year, below the international standards of 1,000 m3/year, while Egypt’s water share of the river Nile is stable.

Egypt relies on its share of the Nile’s water which provides the country with 97% of its water supplies.

In his speech during the opening of the fifth General Assembly of the Arab Water Council in Cairo, Abdel Aty stressed that the country is being challenged by a huge gap between its available water resources which is estimated by 20bn m3/year, and its demands.

Egypt is our most important neighbour in Southern Neighbourhood: EU delegation