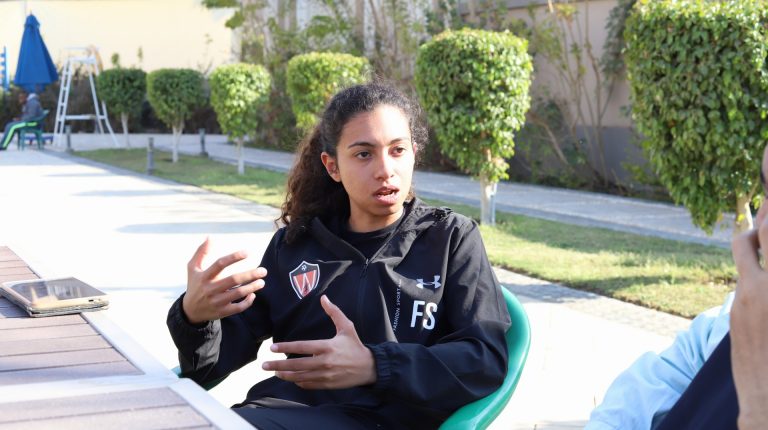 A brunette young woman with childlike features decided to rebel against norms in order to realise her dream, which she wrote down when she was 15: the establishment of a football academy only for girls. Daily News Egypt had the chance to meet Farida Salem to talk about her Empower Academy.

When she was 15, Salem wrote down all her goals, which she has now achieved, including playing for a foreign football team, coaching, and establishing a football academy. 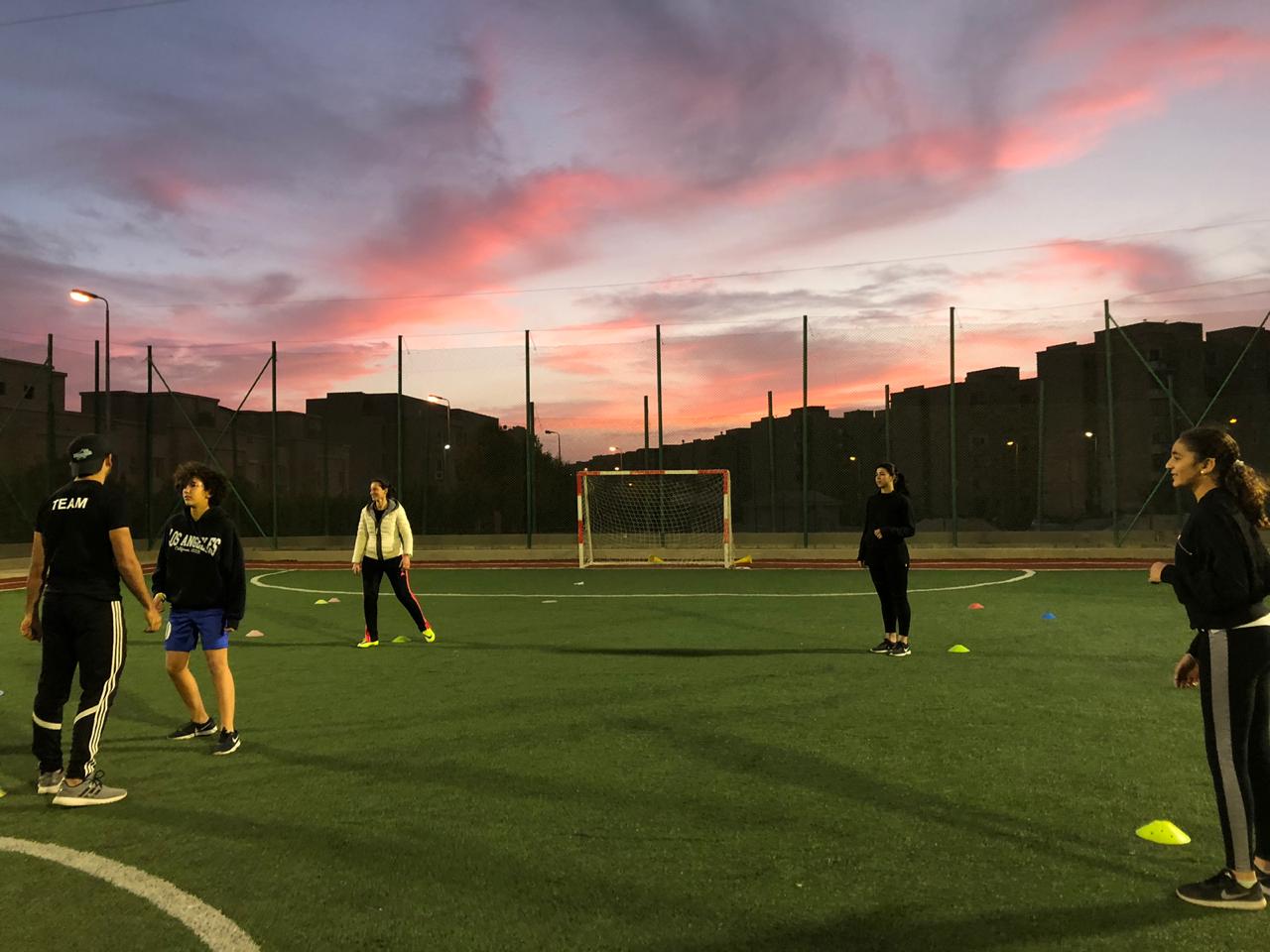 “When I was young, at 12, I wanted to play football. There was no football academy for girls, so I had to play with boys in the Gezira SC, which made me dream of opening an academy for girls. I worked as an assistant coach when I was 16 to prepare for this,” Salem said.

She is now 25 with a bachelor’s degree in sports, health and physical education, from Canada’s Vancouver Island University. She is both a football player and a coach at the same time.

Ever since she was young, Salem loved football. She, however, could not find a place to play at. So, she decided to play with her brothers in Gezira SC. When she became 15, she joined Wadi Degla’s female team, then Maadi SC.

She studied journalism at the American University in Cairo and played football with her university team, and was named the best female player in Egypt before receiving a scholarship from Vancouver Island University to study and practice football at the same time.

“I chose the game [football] after trying many sports. My goal was to prove myself in playing football as young people always see that girls are not capable of playing sports,” she said.

When she was in Canada, she faced several problems that forced her to reconsider her passion and dream. “After graduating, I worked there for a year in areas related to sports, but I felt frustrated. Every job I applied to rejected me for reasons I cannot change. I was not happy abroad, so I thought about my old dream of opening a female football academy.”

Salem did not listen to those who told her to change her plans for money. “Some told me to include boys in the academy to get more money. But in my opinion, girls are just like boys, and could be even better, like in the United States.”

She spoke about the strangest situations she had encountered during her journey with the academy, saying, “When I presented the idea to one of the clubs, an official told me that training girls is not profitable and will not be beneficial. I told him that if I got 20 girls who want to join the academy, I will be successful. He said if 10 joined, I would consider it a success. Two and a half months later, the academy is training 60 girls.”

She talked about her personal life, and the support she got from her family for her project. “I have two younger brothers, one of them works with me in the academy. He is a talented coach who also studied sports in Canada, and played in the US and Canada, as well as trained there. He also helps with the part I miss, financials.”

“Abdulrahman, my brother, came up with the name ‘Empower’. When I returned from Canada, I announced the idea to some of my friends, and they all talked about empowering girls.”

“My family always supports me. My father passed away. And my mother is very proud of me and tells everyone my story.”

Salem also talked about her ambitions to expand her academy. “Fees for joining the academy are EGP 800 per month. We try to offer the best services. We are partners with El-Karma SC in Sheikh Zayed and we have plans to expand in the future. I cannot judge the financial success of a project after only two and a half months.”

“One of my dreams, after five years, is to have a team that can compete in the local league. I am not in a rush for now. But I’m preparing for it by training girls for the future. I am fully dedicated to the academy and I believe that passion deserves all the time and effort I can spend.”

“One of the girls in the academy grabbed my attention, and I helped her to join Wadi Degla SC.”

She added, “I hope to live abroad, especially in Canada, to increase my experience in coaching.” 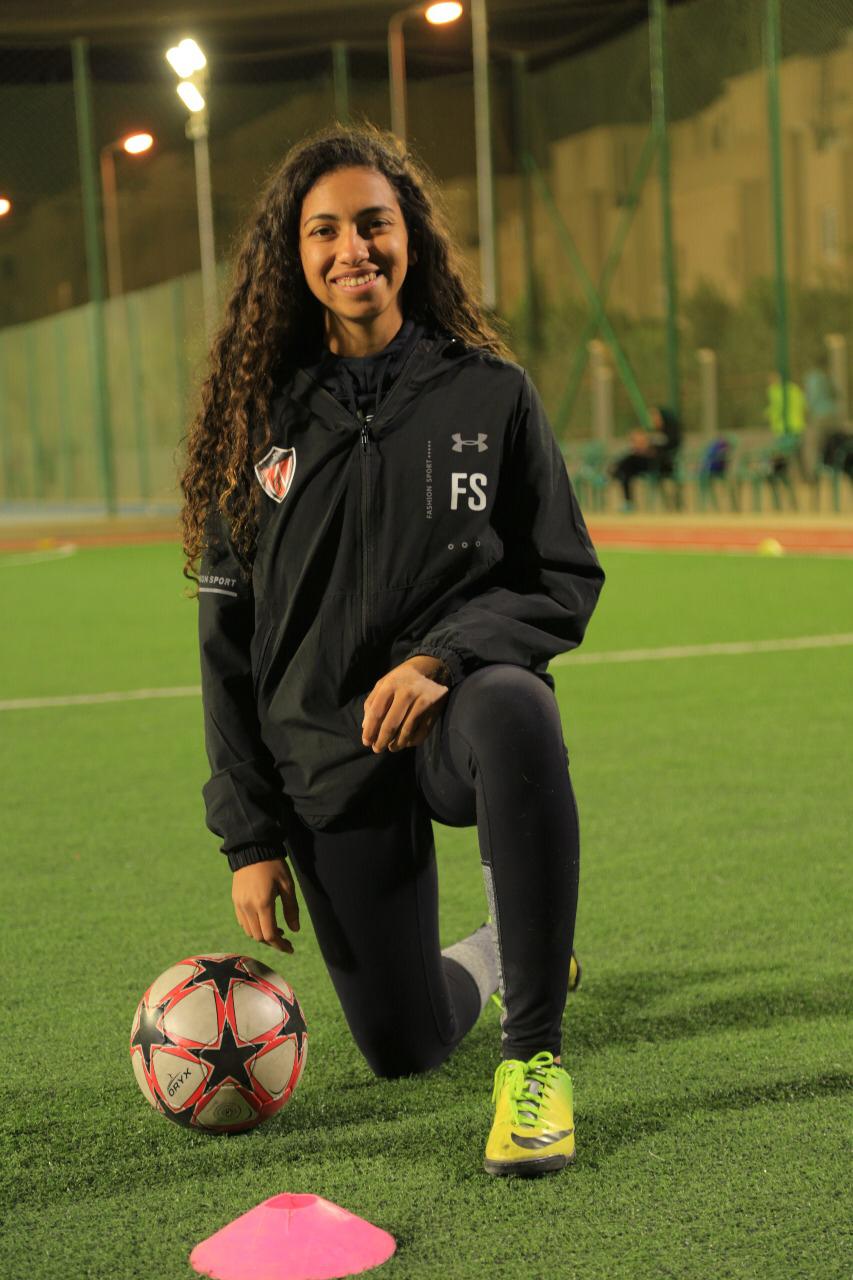 She, however, did not forget her dream of playing football herself. “I was injured, and my hand was broken, which hindered me from joining the Maadi or Wadi Degla clubs. The next season, I will join one of them, probably Maadi. I want to try playing in Europe and I had an offer from Sweden but could not go because of my studies.”

Salem believes that women’s football in Egypt is currently in crisis. “Women’s football in Egypt is suffering from a lack of attention. We are no longer ranked globally. Africans are better in terms of physical strength and we have to train harder to compensate that. I am keen to help young girls with the physical side to have more stamina not just to play football.”

On the conservative look for women who play football and that women’s lives end when they get married, Salem disagrees with that. “Marriage does not stop women from playing football. I will be married someday, which is a positive thing. Some have been married and gave birth but still play football. Ronaldo has the same 24-hour day like others but he was very successful, and I believe can do the same.”

Salem does not see that she is facing many difficulties, perhaps only a few frustrations. “The most frustrating thing for me is when I feel that my female trainees cannot understand my coaching techniques. However, I do my best and I am working to overcome this.”