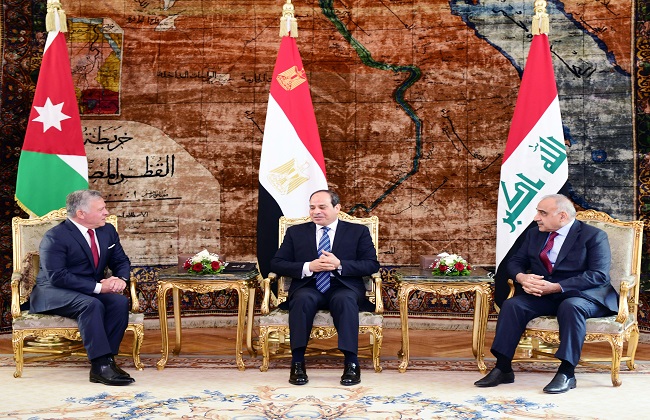 Earlier on Sunday, Al-Sisi received King Abdullah at the presidential palace in Cairo, prior to the summit, and attended a military parade held in honour of King Abdullah.

During the Egyptian-Jordanian-Iraqi summit, the leaders highlighted their countries’ deep historical ties and stressed the importance of working together to enhance the level of coordination between the three countries.

Furthermore, the leaders reviewed the latest regional developments, and agreed to coordinate strategically among themselves and with the rest of the Arab countries to restore stability in the region and to find solutions to the crises facing it, especially the Palestinian cause.

The trio further discussed possible ways to enhance economic integration between the three countries, including the promotion and development of joint industrial zones, cooperation in the energy, infrastructure, reconstruction, and other development cooperation sectors, as well as increasing trade exchange, promoting mutual investment, and developing cultural cooperation.

Over and above, the officials agreed on the importance of meeting periodically to continue coordinating their actions and policies in order to achieve the interests of their peoples regarding stability and economic prosperity, and achieving common goals, and they decided to set up a working group in order to follow up the work of their first summit.

On Saturday, a meeting of foreign ministers and intelligence chiefs from Egypt, Jordan, and Iraq was held in Cairo in preparation for the tripartite summit.

The summit aims “to enhance cooperation and integration between the three countries in various fields, thus contributing toward advancing the process of cooperation and joint Arab action and achieving greater progress, prosperity, and development for the peoples of the region,” a statement by Egypt’s Foreign Ministry said.