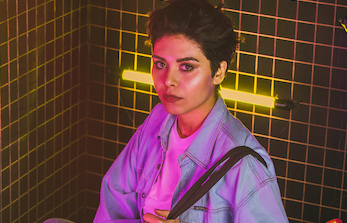 Plastic waste is a global dilemma which multiple entities are trying to control. With marine life suffering the most from unrecycled waste, many already advocate cutting down universal plastic production. Nonetheless, handling the current amount of unprocessed plastic remains to be a threat to nature everywhere. 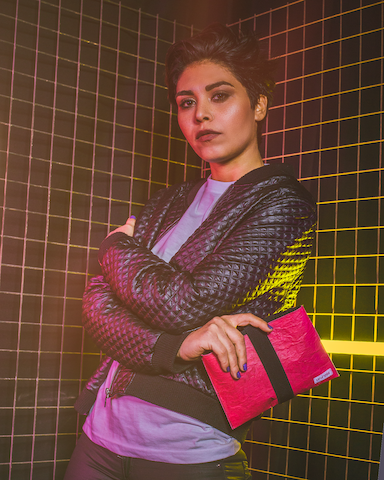 Today, the civilized world produces nearly 300m tonnes of plastic every year, half of it is for single use. More importantly, more than 8m tonnes of plastic is dumped into oceans annually. Furthermore, a study recently suggested that the total amount of plastic ever produced around the world is 8,300m metric tonnes. While tycoon brands, such as Burberry, have already promised to gradually eliminate plastic from its operations in the near future, other innovators are taking a more pro-active approach.

Up-fuse is not only a conscious fashion brand which advocates a wearable solution to the environmental dilemma, but it also introduces contemporary fashion statements. Known for their upcycled handbags and eco-friendly products, the team behind Up-fuse joined forces with one of the country’s most known young artists to create a colourful capsule collection.

“We have been following Farahzada El Shihy’s work for a while,” said Yara Yassin, Up-fuse’s co-founder and design director. “She has a very different and unique work aesthetic, which really adds to what Up-fuse does. Therefore, we decided to approach her as an emerging designer in the scene.”

Known for her minimal illustrations and tribal references, El Shihy was a natural choice for the brand’s debut collaboration. The artist was encouraged to bring her unmistakable aesthetic to the ecological collaboration. Together, the two local talents brought The Ripple Collection to life. Made of plastic waste and decorated with doodles, the outcome is young, practical, and effortless.

With El Shihy’s ability to turn any average medium into magical art and Up-fuse’s ability to turn waste into coveted accessories, The Ripple Collection provides a wide range of sustainable bags, from a shoes bag to a gym bag, a shopping bag and a waterproof laundry bag.

“El Shihy is a young talented artist. We believe that it is always good to work with designers from other fields and backgrounds. Also, her illustrative art designs have added uniqueness to an up-cycled bag that is not only functional, but also trendy and in style,” explained Yassin. 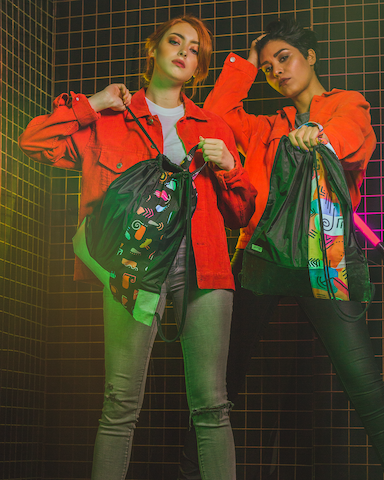 According to Yassin, the main design elements in this collection come from Up-fuse’s brand book, inspired from up-cycled material together with El Shihy’s tribal effect. Made entirely out of plastic bags, the collection advocates reducing waste as well as nurturing a more conscious attitude toward pollution. “Around 2,500 plastic bags were used in producing The Ripples collection. On the other hand, the collection is produced by 10 female artists; four of whom are Syrian migrants,” shared Yassin. With that said, Up-fuse has already managed to turn 18,000 plastic bags into fashion-forward accessories during the past year.”

In parallel, the fashion brand has also supported 50 women by giving them a sustainable source of income. Due to their commitment to their community, the founders of Up-fuse are determined to identify, train, and hire women in need. Their workshop mainly consists of females who financially support their households.

Founded by Yassin and Rania Rafie, then later joined by Lama El Khawanky, Up-fuse embraces sustainability as a core value. Together, the three leading ladies combine their mixture of expertise to balance environment-friendly innovation and fashion.

As true pioneers, the founders were the first to introduce upcycled fashion to the local market. While the initial reaction might have been apparent reluctance, the founders can already sense the difference. “The local perception of upcycled fashion is still growing, but we are very optimistic with The Ripples collection to change the perception of just functional upcycled bags to fashionable and in style upcycled bags,” shared Yassin.

Accordingly, the brand is currently considering multiple expansion plans. First, they plan to collaborate with more artists in the near future in order to further support emerging talents as well as add a new look and feel to their products. Second, they are also contemplating the possibility of expanding into jewellery soon.