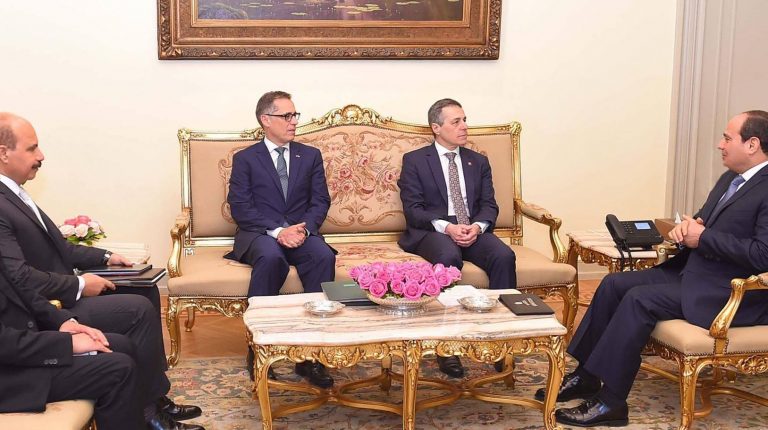 Al-Sisi reviewed the latest economic developments in Egypt during the last period which witnessed implementing the comprehensive economic and social development program.

Cassis noted that Switzerland seeks bolstering ties with Egypt in light of its role played in maintaining peace and stability in the Middle East region. The meeting took up also means of increasing Swiss investments in Egypt especially the mega development projects.

Cassis, met with Egypt’s Minister of Investment and International Cooperation, Sahar Nasr, as well as with the Foreign Minister, Sameh Shoukry, to discuss ways of boosting economic and political relations.

Egypt is the gateway for Swiss investments into Africa, Cassis noted, affirming that cooperation with Egypt focuses on educational, industrial, and transport sectors.

According to a statement from the MIIC on Monday, Nasr said that Switzerland is a key European partner for Egypt, pointing out that the joint cooperation focuses on developmental projects worth about EGP 5.7bn.

The cooperation strategy with Switzerland until 2020 supports new projects which aim at sustainable economic growth and creating job opportunities, the statement added, noting that the new projects’ costs are worth about EGP 1.5bn.

Nasr praised the Swiss foreign direct investments which reached $1.6bn, increasing by $400m over the past couple of years in the fields of industry, energy, pharmaceuticals, financial services, and the food industries.

“We look forward to more joint cooperation with Switzerland in Africa, in line with Egypt’s presidency of the African Union in 2019,” Nasr stated, calling for new Swiss investments in the Egyptian market in view of Egypt’s enjoyment of new investment opportunities in new cities such as the New Administrative Capital and New Alamein City.

Earlier on Sunday, Cassis met with Shoukry where they discussed the commitment to peace and the stability of the region as Egypt is an important partner of Switzerland.

On Sunday, Cassis paid a visit to the Saint Andrew Refugee Service, which, since 1979, and with the help of Switzerland, has been providing support to migrants and refugees to improve their living conditions in Egypt.

On Monday, Cassis concluded a two-day working visit to Egypt.