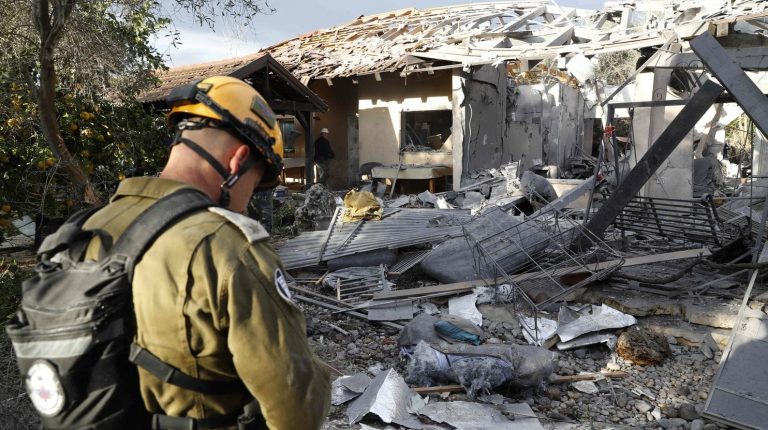 Seven Israeli people were wounded early on Monday after a rocket hit a house in the farming community of Mishmeret, northern Tel Aviv, in central Israel.

The rocket, which is the first of its kind to reach central Israel, is believed to be fired from the besieged Gaza Strip.

According to Israeli media, the Israel Defence Forces (IDF) accused the Palestinian resistance movement Hamas, which is ruling the strip, of firing the rocket against Israeli citizens.

The IDF said that the rocket “was fired from a Hamas position in the area of Rafah in the southern Strip, some 120 kilometres from where it struck.”

The seven injuries include two women, two children and an infant, who had minor wounds, according to Israel’s ambulance service. The sounds of air raid sirens were heard in the Sharon area, northeast of Tel Aviv where residents were urged to head to bomb shelters.

Hamas did not comment on the Israeli accusations so far.

Israel’s Prime Minister Benjamin Netanyahu cut his visit to the US short after his meeting with President Donald Trump, to return to Israel in order to follow-up on the incident.

Netanyahu said that Israel “will respond forcefully” to the rocket fire and that he was returning “to manage our operations up close.”

Moreover, the Israeli army has sent two brigades to Israel’s borders with the strip and is preparing to call up thousands of reservists, including some from the Air Defence Command, the Intelligence Corps, and the Home Front Command, according to Israeli media.

The rebel strip, which witnesses weekly demonstrations titled the ‘Great March of Return’ against Israeli presence in Palestinian territories, is about to face a new Israeli raid.

Furthermore, the leader of Hamas in Gaza, Yahya Al-Sinwar, has cancelled a popular conference, because of recent developments. The conference was set to be held on Monday afternoon.