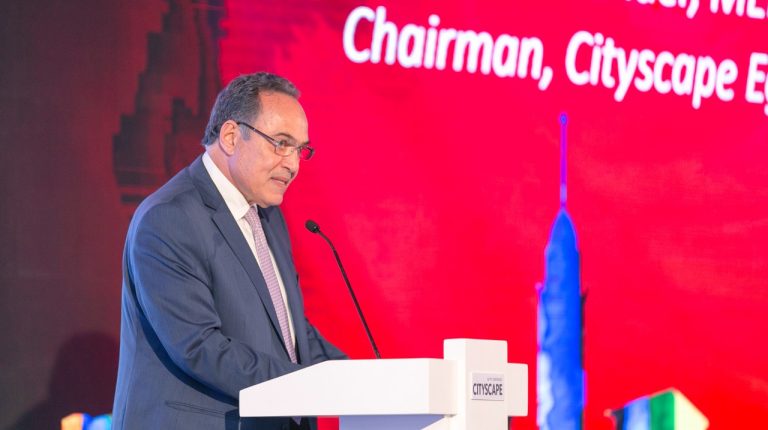 Egypt is implementing several new cities and urban communities to double the state’s urban area and absorb the continuous population increase, which reflects the size of development and investment opportunities currently available in Egypt, according to Fathallah Fawzi, the general manager of the Cityscape Egypt conference.

During the opening session of Cityscape Egypt on Sunday, Fawzi said that construction and real estate investment sector contributes 16% to the GDP, of which 70% were provided by the private sector, which shows the importance of the private sector in implementing the development and investment plan of the state.

Fawzi pointed out to the importance of the idea of the general developer to implement the current urban development plan, which lifts the financial burden on the state and contributes toward the provision of more land for different categories of developers.

“The models that have been implemented according to the general developer system have already proved successful, and that full cooperation between the state and developers contributes to accelerating development rates,” he elaborated.

Fawzi praised the recent decision of the ministry of housing to return to its supervisory role in the market, where the state took the first risk to penetrate these new urban communities to encourage developers to be present in these cities.

Furthermore, he stressed that this step is a major encouragement for local and foreign investors to be present in the Egyptian real estate market. Therefore, the ministry should focus on mechanisms of regulating the market during the coming period and supporting the export of property.

He also called for the necessity of participating in more foreign exhibitions and speeding up the process of issuing real estate developers’ federation law, and the expansion of partnership with the private sector.

Moreover, he urged that the participation of the private sector in the implementation of the urban development plan, Egypt’s Vision 2030, should be increased and more land should be provided for developers, which is subject to the rules of supply and demand that in return they will contribute toward reducing the value of lands and thus control the cost of implementation and selling prices.

Cityscape Group Director, Chris Speller, said, “Conference delegates have been given a clear indication of the government’s strategy for the sector with the creation of new cities now being of prime concern. This amounts to a green light for huge development going forward and will be a major fillip for the sector.”

The opening day of the Cityscape Egypt 2019 conference saw delegates focusing on strategic industry issues with a powerful speaker line-up of leading developers, financiers, business leaders, government officials, innovators, and planners providing insights into the likelihood of shaping of the industry in the years to come. The conference also heard a call for the finance sector to respond to middle-class buyer demand by establishing a mature mortgage market, while break-out roundtable discussions homed in on tourism, hospitality and industrial investment development opportunities.

The second day of the conference will concentrate on the architecture, design, and technology which is now impacting the Egyptian sector. “Design is now being seen as a key sales element in a market of increasingly discerning buyers,” explained Speller. “Delegates will explore issues which could soon see Egypt rank as a country of ambitious yet heritage-sensitive architecture and design.”

The Cityscape Egypt conference comes in the run up to Cityscape Egypt – the country’s largest networking exhibition on property development – which is being held at the Egypt International Exhibition Center (EIEC) between 27-30 March. Over 60 developers will be at the exhibition looking to tender competitive offerings to a market with an annual residential demand in excess of 900,000 units.