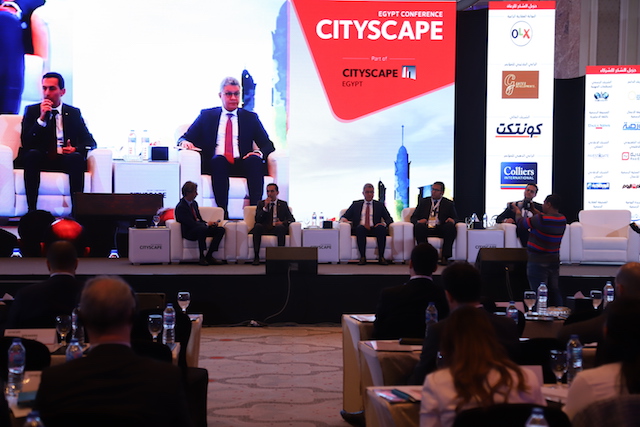 Co-Founder, chairperson and CEO of DMG-Mountain View, Ayman Ismail, said that real estate sector represents about 16% of Egypt’s GDP and is considered an influential market and locomotive for economic growth.

During the Cityscape Egypt conference held on Sunday, Ismail noted that the market is experiencing a change in the supply and demand balance. There is always an increase in demand over supply for upper middle-income housing, but recently the market has seen an increase in supply over demand for this segment of housing which has never happened before.

He pointed out that this change, however, does not affect property prices in the Egyptian market.

Furthermore, Ismail explained that the cost of implementation is the same in all markets, but what leads to reducing the cost of units is controlling the price of land. Therefore, the continued increase in real estate prices is expected, as well as reductions in unit prices are associated with a reduction in land prices.

Egyptian real estate prices are still the lowest compared to global markets, which indicates the need to expand in export, he stressed.

Director of Healthcare, Education, and PPP for MENA Region at Colliers International, Mansoor Ahmed, said that the expansion of the Egyptian real estate market amid the establishment of several new cities requires the redistribution of services and logistics centres to cover all the needs of citizens, considering the population density.

Ahmed noted that the local market is witnessing an increase in population density, which requires the spread and fair distribution of logistics and commercial centres, which will achieve good returns of profitability.

He pointed out that the market is witnessing clear changes in the level of citizens dealing with commercial centres, especially that there are large segments which rely on e-commerce.

Furthermore, he added that e-commerce is expected to increase in Egypt by 16%, noting that the emergence of specialised e-commerce companies in the world over the past five years-most notably Amazon-as well as the branches of these companies will have a positive impact on the market.

E-commerce has a clear impact on real estate sector and services in all countries, he added.

Moreover, he highlighted the importance of the interest of commercial companies specialised in the expansion of the establishment of commercial centres in new cities, especially the New Administrative Capital (NAC) and it is expected to be densely populated in the coming years, which requires the presence of service centres in order to meet customer needs, explaining that the Egyptian market is one of the largest markets at the level of population density.

Addressing a gathering of C-suite real estate professionals at the Four Seasons Nile Plaza in Cairo under the theme ‘Energising the Market and Re-instating Confidence,’ Khaled Abbas, deputy minister of housing, utilities and urban communities, offered updates on the country’s new cities and government plans in the sector.

“Our plan is to expand current developments and create investment centres – not only in the NAC – but also throughout the country. Three phases for the Administrative Capital have already been announced. One of the areas we are looking at is the Green River, which will eventually house the biggest park in the world, while our Capital Business District will house the highest tower in Africa at 385 metres,” he said.

The deputy minister also shed light on Alamein, revealing that the idea is to transform the city into a coastal and tourism destination with between 10,000 to 12,000 hotel rooms and to leverage its position as a prime tourism destination.

“Alamein is already considered a tourist attraction and we want to enhance this even further by upgrading its airport, infrastructure, and road network and adding universities like the Alamein International University for Science and Technology,” he added.

Speaking in the panel discussion Rebooting the system: Key steps to invigorate the market and attract investors, Amr ElKady, CEO of City Edge Developments, said that they have tried to be innovative in the market, penetrating new cities such as New Alamein, at a time when most developers were apprehensive about entering.

“It’s a new city overlooking the sea and because most residential communities emphasise villas, we have introduced something new to the market; high-rise towers, and we have found this to be very successful for us. This experience was replicated in El Mansoura, and we’ll be launching a new project in the new capital as well,” he concluded.