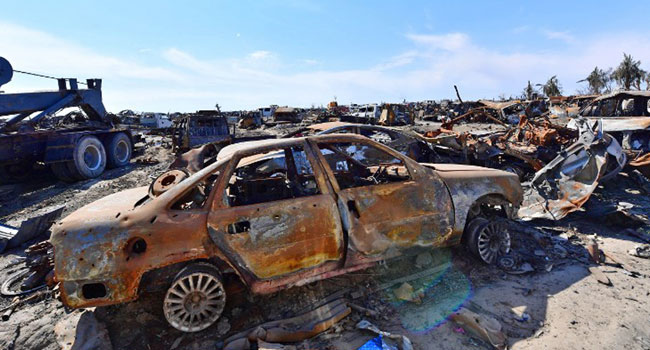 Islamic State (IS) group jihadists emerged from tunnels to surrender to US-backed forces in eastern Syria on Sunday, the US-backed Syrian Democratic Forces (SDF) said after one day of declaring that the “caliphate” is defeated.

“They are IS fighters who came out of tunnels and surrendered today,” said Jiaker Amed, the SDF’s spokesperson. The announcement marks the end of the terror group’s self-proclaimed caliphate, which at its height in 2014, covered large swathes of Syria and Iraq.

Following months of staging an offensive, the SDF was declared to be victorious on Saturday, after more than 66,000 people, mostly civilians, have quit the last IS stronghold since 9 January.

AFP reported that among these are 5,000 jihadist fighters and 24,000 of their relatives, as well as 37,000 other civilians. Surrendering or suspected jihadists are detained, while their relatives are trucked up north to camps for the displaced, Reuters said.

In Iraq, also a former headquarter of the Caliphate, reports are emerging of lone wolves’ suicide bombers.

On Sunday, six suicide bombers with the IS group detonated their explosives while being hunted down from a rival rebel group in Syria’s north western province of Idlib, the Syrian Observatory for Human Rights said.

The bombing took place during clashes between the IS militants and the Al-Qaeda-linked Al-Nusra Front which controls the entire Idlib area.

Despite the loss of territory, the IS group is still seen as a major security threat, with offshoots in Nigeria, Afghanistan, and Yemen, and supporters in Western countries who are willing to carry out attacks. The bombings reported on Sunday prove that the IS still has sleeping cells capable of carrying out attacks and bombings in the country, despite the defeat of their physical entity in Syria.

The IS leader Abu Bakr Al-Baghdadi declared the caliphate in June 2014. At its height, the group imposed its brutal interpretation of Islamic Law on millions of people.

French President Emmanuel Macron said France was safer, but warned that “the fight against terrorist groups must continue.”

US President Donald Trump hailed the end of the IS caliphate, but promised that the US would remain “vigilant” in fighting the group.