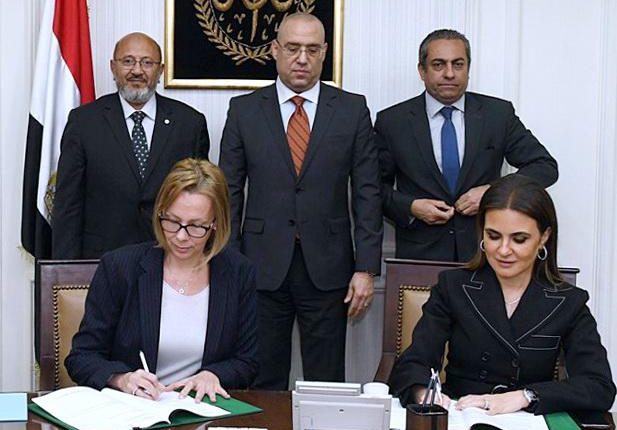 Malinne Blomberg, Egypt’s country manager at the African Development Bank (AfDB), signed with Egypt’s Minister of Investment and International Cooperation, Sahar Nasr, a grant worth $600,000 to prepare the feasibility study, as well as the environmental and social impact assessment for the joint project titled ‘Sludges Treatment of Aborawash and Zinin plants.’ The signing took place in the presence of the Minister of Housing, Utilities and Urban Communities, Assem El Gazzar.

The planned project is one of the world’s biggest sanitation projects, Blomberg said in a Tuesday statement of the MIIC, affirming the AfDB’s keenness to boost its cooperation with Egypt in the next period.

“We have participated in financing about 100 projects in Egypt. Over the past decade, we approved to finance 42 projects with investments worth about $2.5bn,” Blomberg stated, noting that the bank’s current portfolio is at $3bn for 31 projects, topped by the support of the government’s economic and social programmes.

The AfDB’s support remarkably contributed in enhancing the investment environment in Egypt which led to Egypt leading African countries in terms of attracting foreign direct investments, she added.

The project will offer a numbers of benefits, including eliminating the environmental problems resulting from spreading the sludge and exposing it to the sun, the non-leakage of polluted water to the aquifer, and the use of methane gas from sludge treatment with anaerobic fermentation in the production of electricity used in the operation of the station, El Gazzar said.

For her part, Nasr said that the project aims to protect the environment and water resources and reduce the health risks resulting from the pollution of the Rasheed branch, which contributes toward improving the standard of living of the citizens, and will benefit about 10 million citizens, especially the most needy classes.

The project contributes to the promotion of social and economic development and food security, and aims to increase the capacity of the infrastructure, which will improve the investment climate in Egypt in general, Nasr highlighted.

AfDB to focus on financing manufacturing sector in Egypt