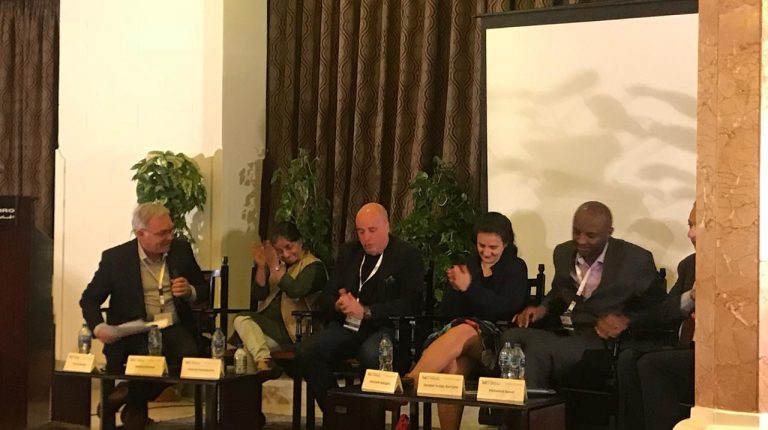 Sweden’s Tällberg Foundation organised on Sunday a forum in partnership with the American University in Cairo’s (AUC) School of Global Affairs and Public Policy (GAPP), in which it introduced prominent leaders from the world who spoke about their challenges and successes during the 21st century.

Former Egyptian Foreign Minister, Nabil Fahmy, who is also the founding dean of the GAPP, opened the forum with a brief speech, addressing the challenges facing the leadership during the 21st century. His speech focused on the fact that a leader, whatever his/her job or position, should be worried and constantly thinking about the public interest.

The forum, which is titled ‘Leadership in a Disrupted World,’ was held at the Tahrir Cultural Centre to discuss the challenges confronting leaders from Europe, Egypt, India, Kenya, and the United States in the 21st century.

Furthermore, the forum featured discussions among leaders including the CEO of the Renewables Grid Initiative, Antonella Battaglini; the Founder of Prajwala, Sunitha Krishnan; Co-President of the Stavros Niarchos Foundation (SNF), Andreas Dracopoulos; the Senator for Murang’a County, Irungu Kang’ata, and Professor of Political Science Mohamed Kamal.

Sunitha said that the organisation was working to save children and women in India from sexual slavery, and that she had saved about 20,000 children and women form such a crime, noting that she was subjected to a bitter experience at the age of 15 and that she saw children raped several times, which led her to face serious psychological issues, and she thought of how to confront this problem without a desire for revenge.

She said that she feels overwhelmed when she sees the smiles on the faces of those whom she helped break out of sexual slavery and overcome their pain, noting that she faces failure every day, when she goes to save a hundred children and a woman, and find that there are more than a thousand who need rescuing.

Dracopoulos explained that he started his work before the financial crisis in Greece, noting that the aim of the establishment of his institution is to instil hope in the hearts of people, communicate with them, set up an opera house, a library and a garden and work in Greece without a hidden agenda, adding that the real leader in the world is the man who creates hope for mankind or leads them without oppression.

“We want a strong leader, but without being totalitarian or authoritarian,” he said.

On the other hand, Battagellini said that her organisation was working to bring together former enemies together to face the biggest challenge facing humanity today–climate change, through breaking bridges between people, pointing out that leadership and honesty are two sides of a the same coin, which is the first reason for the success of her initiative.

Meanwhile, Kangata said he began to climb the leadership ladder at an early age when he was a university student. He took over the presidency of the student union and then stepped down to give others the chance to lead. He became a senate member.

He also said that the real leader is the one who takes the opportunity and creates great initiatives for others. Furthermore, he stressed that the leader must have the ability to anticipate and look long enough to contribute toward developing and changing oneself and the society for the better. The leader must also decide to step down from office or position to leave room for others to present their ideas for the development and welfare of society.

Furthermore, Kamal added that a good leader is the one who pays attention to issues of education and health with the same attention to issues of rights and freedoms, explaining that Egypt and Tunisia, before 2011, were making remarkable progress in human development, not human rights, which led to the outbreak of mass demonstrations demanding a change in the political system.

He pointed out that the demonstrators expected to get a good education, in addition to freedom, stressing that a good leader is the one who not only possesses the ability to forecast, but also the speed needed to change.

The foundation will grant a prize of $50,000 to any outstanding leader from any country and can be nominated by people anywhere, selected by a secret ballot from a jury composed of accomplished global leaders.

The Chairperson of the Tällberg Foundation, Alan Stoga, said that two to four winners will be announced in November and will be honoured during the 21st Century Leadership Celebration in the Kenyan capital of Nairobi.

The Tällberg Foundation, with offices in Stockholm and New York, aims to provoke people to think—and therefore act—differently about the global issues that are shaping their present and their future.