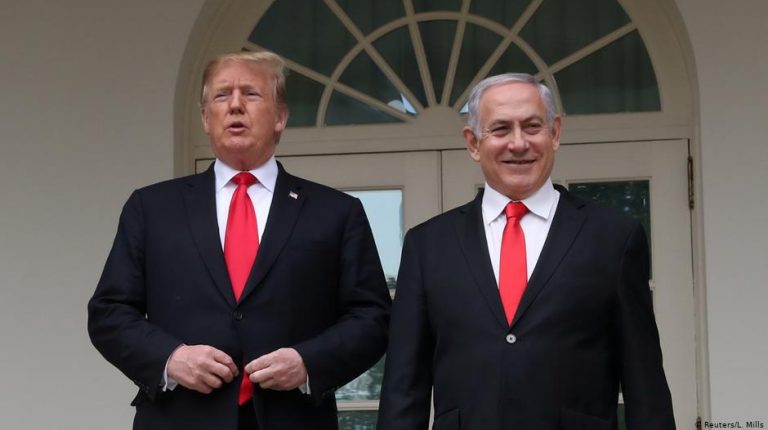 The United States President Donald Trump signed late on Monday an official proclamation recognising Israel’s sovereignty over the occupied Golan Heights, a few days after his controversial announcement of his country’s obligation to take such a move.

During a ceremony held at the White House, Trump hosted Israel’s Prime Minister Benjamin Netanyahu to sign the document. Netanyahu praised the US President’s move and said that “proclamation comes at a time when the Golan is more important than ever for our security,” in reference to the Iranian threats near the heights.

Netanyahu claimed that Israel won the Golan Heights in a “just a war” and the Jewish people’s roots go back thousands of years.

Trump’s declaration came as a major shift from the US foreign policy over decades, and was largely denounced by regional and international countries including Syrian-backed supporter Russia, Saudi Arabia, Qatar, Kuwait, Bahrain, Turkey, Jordan, and Lebanon.

Saudi Arabia denounced Trump’s move in a statement, maintaining that the plateau will remain an occupied Syrian Arab land, noting that the recognition of Israeli sovereignty is a violation of the UN Charter and international resolutions.

For the UN, the Secretary General’s Spokesperson, Stephane Dujarric, said that the statue of the Golan Heights “has not changed,” adding that the UN’s policy on the Golan “is reflected in the relevant resolutions of the Security Council, and that policy has not changed.”

Meanwhile, Syria harshly condemned Trump’s announcement describing it as “blatant aggression” over the Syrian sovereignty over its territories.

Earlier last week, Trump declared that it is time for the US to recognise Israel’s sovereignty over the Israeli-occupied Golan Heights, raising outrage among Arab countries.

The Golan Heights is a rocky highland located in south-western Syria, which overlooks the upper Jordan river valley. During the 1967 Arab-Israeli War, Israel occupied around 1,200 square kilometres of the Golan Heights from Syria. During the 1973 October War, Syria, under the rule of late President Hafez Al-Assad, tried to reclaim the Golan but failed.

In 1974, Syria and Israel signed an armistice. The United Nations Disengagement Observer Force was established by the Security Council resolution.

Then in 1981, Israel unilaterally annexed the Golan Heights, a move that was never internationally recognised. Since capturing the Golan, Israel set up dozens of settlements. Up until today, there are thousands of Jewish settlers living in the Golan along with around 20,000 Syrians from the Druze sect.