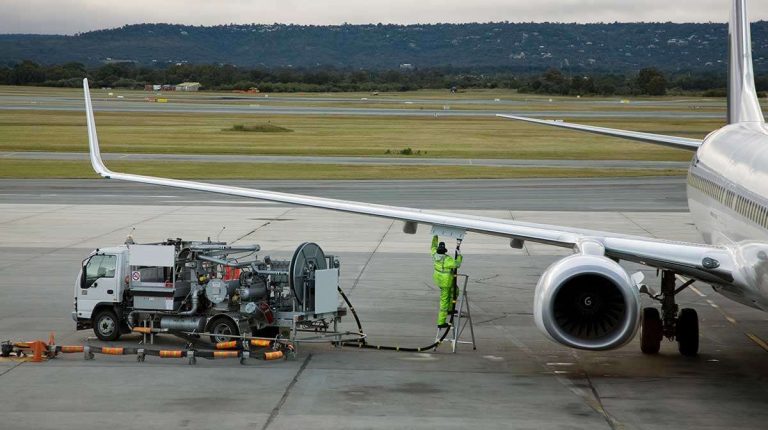 Chinese scientists have developed a new method to transform plant residues and harvest them into high-quality jet fuel.

This step is thought to help in reducing carbon dioxide emissions from fuel combustion in aircrafts and missiles.

Cellulose, which is the main component of plant stems, is one of the potential targets for the manufacture of cheap, renewable, and available biofuels in the environment, as it contains cheap polymers.

Previously, scientists have used cellulose derivatives to manufacture aromatic chains of hydrocarbons -which is part of the fuel components- to be used and integrated into the process of manufacturing jet fuel.

According to the study, which was recently published in the Joule energy journal, the proposed fuel is the first of its kind to produce more complex compounds that can be used – alone – as high-intensity aviation fuel.

Aircraft fuels consist of long chains of carbon and hydrogen atoms, derived from fossil fuels, similar to the fuel used in heavy-duty or diesel-powered vehicles, which are costly and environment polluting, as they produce sulphur oxides and carbon dioxide when burnt.

Correspondent author of the study Ning Li from the Dalian Institute for Chemical Physics told Daily News Egypt that the main conclusion of the study is that researchers demonstrated an effective and comprehensive strategy for the synthesis of renewable high-density aviation fuel with cellulose.

Subsequently, Carbon 12 (C12) and Carbon 18 (C18) poly-cycloalkanes were directly produced by the reaction of ‘2,5-hexanedione’ and hydrogen over a dual-bed catalyst system. As a potential application, the C12 and C18 poly-cycloalkanes as obtained can be used as high-density aviation fuel or additives to improve the volumetric heat values of conventional aviation fuels, according to Ning.

He further noted that this study opens a new general strategy for the synthesis of advanced aviation fuel with cellulose. “We have worked for about 1.5 to 2 years on this paper. We have no experience about the suggested fuel. It is a new bio-fuel,” the researcher told DNE.

Clarifying the importance of the proposed biofuel for mitigating CO2 emissions, Ning mentioned two main reasons, “First, as other biofuels, our biofuel is CO2-neutral because it is derived from biomass. Second, compared with conventional aviation fuels, our new biofuel has higher density (or volumetric heat values), which is also an advantage for CO2 emission reduction.”

The utilisation of high-density aviation fuel can significantly increase the range and payload of aircrafts without changing the volume of the oil tank. These characteristics can further decrease the CO2 emissions during airplane take-off and landing (by decreasing flight amounts) or rocket launches, according to the paper.

Ning and his team used various methods to reach the findings of the study. First of all, cellulose was selectively hydrogenolysed to ‘2,5-hexanedione’ in an isolated carbon yield of 71.4%. Second of all, a mixture of C12 and C18 branched poly-cycloalkanes was directly obtained in a carbon yield of 74.6% by the aldehyde alcohol.

The poly-cycloalkane mixture obtained by this process has high density-0.88 g/mL-and at low freezing point –225 K. In real application, they can be used as advanced aviation fuel or as additives to improve the volumetric heat values of conventional aviation fuels.

Although ‘di-chloro-methane’ works well to increase the yield of ‘2,5-hexanedione’ from the hydrogenolysis of cellulose, it is not environment friendly. This may limit the industrialisation of this technology, according to the researcher.

“In the future, we will go on to explore the environmentally friendly and renewable organic solvent which can replace the dichloromethane used in the hydrogenolysis of cellulose to ‘2,5-hexanedione,’” he said.