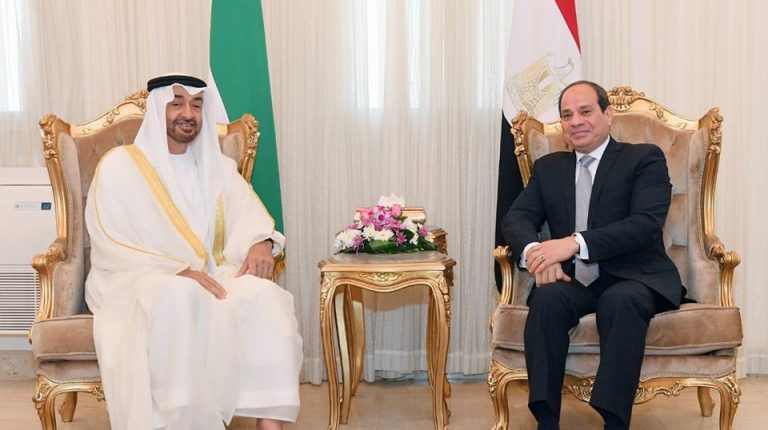 President Abdel Fattah Al-Sisi have signed a number of cooperation agreements with the Crown Prince of Abu Dhabi, Mohamed bin Zayed Al-Nahyan, in fields of housing, irrigation, as well as trade and industry, according to the presidency’s spokesperson, Bassam Rady.

Al-Sisi received Al-Nahyan at Borg El Arab Airport in Alexandria early on Wednesday. The officials attended a bilateral meeting, followed by a session of extensive discussions involving delegations from the two countries.

From his side, Al-Nahyan expressed his pleasure over visiting Egypt during the talks with Al-Sisi, pointing out the appreciation and respect of the UAE’s leadership and its people to Egypt. He stressed the UAE’s interest in its strategic relations with Egypt, in light of Egypt’s pivotal role in supporting the stability and security in the region.

Moreover, the two sides reviewed the latest developments of the regional situation and the issues of common concern, stressing their keenness to continue the coordination and consultation between the two countries. The two leaders declared that they will continue to address the challenges facing the Arab nation, and will reject the interference in the Arab countries’ internal affairs, as it threatens the stability and security of the Arab countries.

Noteworthy, Al-Sisi met with the Crown Prince of Abu Dhabi in August last year at the Presidential Palace, in which they agreed on boosting the bilateral relations and cooperation.

The recent years witnessed a close coordination between the two countries on key issues such as the Palestinian, Iraqi, Lebanese, Libyan, Yemeni and Syrian issues. There is a great convergence of views and political stances on regional issues especially in combating terrorism and extremism.

Over and above, the UAE’s support to Egypt since the June 30 Revolution managed to increase the Egyptian state’s capabilities to confront the internal and external challenges and to combat terrorism, and continued its support during the Egyptian pound’s flotation. Moreover, the UAE has deposited $1bn at the Central Bank of Egypt for a period of six years in order to support the Egyptian exchange market.