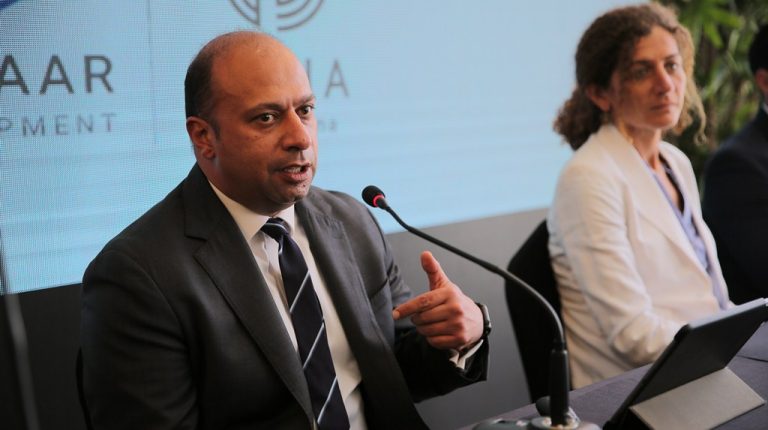 Maged Salah Al-Din, CEO of Madaar, told Daily News Egypt that the company allocated EGP 3bn for construction contracts of the project’s first phase, and plans to direct EGP 1bn toward the project’s construction works in the current year.

Salah Al-Din said that 90% of the first phase of the project comprising of 1,500 housing units have been completed, with investments estimated at EGP 7bn.

He noted that the company has managed to complete the sale of whole units of the first phase of the project that encompasses 400 units and will be successively delivered by the end of this year.

“The company projects to begin construction works of the second phase of the Azha project within six months and that includes 1,212 units with investments worth EGP 6bn,” he revealed. “Additionally, the company aims to achieve EGP 2bn in sales this year,” Salah added.

Azha is a residential and tourism project which is planned to be completed in 2025. It stretches over1.7m sqm and comprises of four hotels.

Salah Al-Din added that the first hotel encompasses 150 rooms, 80 of which will be operational by the end of the current year.

He also pointed out that total contractual sales have been achieved, worth EGP 4bn, since the project’s launch. Azha aims to achieve sales worth EGP 14bn of the residential part with the completion of its implementation in 2025.

The project is characterised by a unique location and integration of activities and services, he further noted, adding that the area is active throughout the year and not only during the summer period, which is forcing Madaar to continuously improve the project’s services and to adjust according to the region’s development requirements.

He explained that the company has two other projects that represent an opportunity to expand during the next period. The first is the Crazy Water project in the Sixth of October City, located on an area of 45,000 sqm, which is a mixed-use commercial administrative project, which includes serviced apartments.

“The licences of the Crazy Water project are underway. Furthermore, it is expected to finalise the project implementation and marketing in the coming year. It is also expected that the project will witness great demand when it is launched, depending on the shortage of commercial and administrative space available in the local market,” he disclosed. “In addition, the volume of development taking place in the west Cairo area and the expected tourism movement with the opening of the Grand Egyptian Museum as well will need the launch of serviced apartments in order to accommodate tourists visiting the area.”

He elaborated that the company also owns a land area of 150 feddan and is located in the New Sphinx city, revealing that the company is currently legitimising the land situation following the presidential decree to launch the New Sphinx city. Madaar Development plans to implement an integrated residential project on that plot of land once the legitimisation procedures are finalised.

Madaar’s CEO highlighted that real estate market sales are still active and strong, but what has changed is the emergence of a large number of real estate companies in a limited time, which led to the distribution of the targeted customer segment over a larger number of companies. Therefore, sales are the same, but what has changed is the share of each company from these sales.

He pointed out that the market will adjust itself in the coming period, and only serious developers will continue unlike non-serious companies without experience or strong solvency.

Moreover, he expected price increases between 15 and 20% in the real estate market during the current year due to the expected hikes in fuel prices which are scheduled for the middle of this year, which will obviously affect the cost of implementation.

Consequently, real estate companies have to think about new operational and marketing mechanisms in order to deal with the continued stability of the purchasing power of the targeted customers, he clarified.

Additionally, he stressed the importance of the steps taken by the state, in cooperation with real estate developers, to support real estate export to acquire a percentage of the total volume of international real estate export, which is a long road that the government plans to embark on at an accelerated rate.

Therefore, the state has participated in a number of international exhibitions, namely, the MIPIM exhibition in France, which is a global gathering of investors and international investment funds, he explained, noting that meeting the required needs to expand property export and is one of the important mechanisms to reach the state’s goal.

The issuance of a law granting residence in return for the purchase of property is expected to be enforced during the current year, he added, noting that this law is a strong and supportive step for the export of property, and puts Egypt on the competitive map with the markets located in the region.

Furthermore, Salah Al-Din illustrated that his company plans to market part of the Azha project in Ain Sokhna for non-Egyptians customers, especially with the suitability of the product for foreign customers who prefer to buy tourism properties.

Finally, he praised the state’s efforts in expanding urban areas in new cities to absorb the population increase, explaining that the government has also taken the first risk of investing in these new cities in order to encourage developers to participate in the development of these new cities.