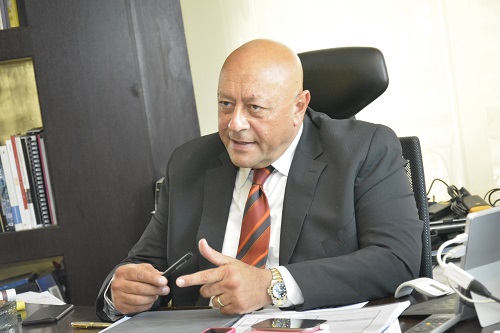 Rooya Group for real estate investment has achieved EGP 2bn in contractual sales by the end of 2018, and plans to reach EGP 3bn in sales in 2019, according to Chairperson of the company, Hisham Shokry.

Shokry told Daily News Egypt that the company has an ambitious plan to begin the implementation of its commercial and administrative project, Stone Park, which includes a commercial part with investments exceeding EGP 4bn on an area of 200,000 sqm. The other administrative part is Stone Towers with a total investment of EGP 7bn. Daily News Egypt interviewed Shokry, the transcript for which is below, lightly edited for clarity:

Rooya has achieved EGP 2bn in sales over the past year. The company plans to reach EGP 3bn this year, driven by the launch of new phases of its projects, and the continuation of the market movement.

What is the value of investments the company plans to direct in the current year?

The company plans to inject EGP 2.5bn in investments into our projects this year.

The company has an ambitious plan. We will begin the implementation of the commercial and administrative project, Stone Park, which includes a commercial part with investments exceeding EGP 4bn on an area of 200,000 sqm. The other administrative part, called Stone Towers, has a total investment of EGP 7bn. The project’s drilling work has been started, and the project will be marketed during the current year.

The total volume of the company’s land bank is 9m sqm, of which 6m sqm are under development and the rest of the land bank is planned to be developed during the coming period.

Did you sign contract with the New Urban Communities Authority (NUCA) to co-develop a project in New Cairo?

The contract between our company and the NUCA has not yet been signed. It includes an area of 184 feddan in New Cairo. The company plans to implement an integrated urban project under the partnership system.

As the president of the Real Estate Export Council, how do you see Egypt’s participation in the MIPIM exhibition in France?

The exhibition is held annually and serves as a forum for all international investment funds to be present and to know of the investment opportunities available in each of the participating countries. Egypt’s participation in the MIPIM exhibition was distinctive. Moreover, it is the first time that the Egyptian Ministry of Housing participates in an official pavilion comprising of a number of real estate developers.

There are many countries that have a stable pavilion for over 10 years in the activities of the MIPIM exhibition, through which they managed to attract international investment funds.

In the MIPIM, there were some private sector projects as well as national projects implemented by the state, the most prominent of which are the Central Business District at the New Administrative Capital (NAC), which includes the towers area, the Capital Park, and the New Garden City projects. As well, the Latin Quarter in the New Alamein City and real estate projects by companies participated in the exhibition were presented.

What are the main topics which have been discussed during recent meetings of the Real Estate Export Council?

All obstacles facing international investment funds in the Egyptian market were presented to the prime minister during his recent meeting with the Real Estate Export Council’s members. The main obstacle is the absence of tax exemptions for real estate investment funds – as is the case in other countries – which is an investment catalyst for the presence of such funds. The Financial Regulatory Authority (FRA) sets the rules for the work of such funds in Egypt, unlike other countries in the world, so each fund sets its work policy with a commitment toward transparency and controlled by the FRA.

Additionally, there are specialised investment funds in financing infrastructure projects with annual funds of about $2.5tn, and Egypt does not receive a share from this fund. These funds are attractive to investors around the world due to their guaranteed revenues. They are managed by professionals who contribute to achieving a comprehensive developmental renaissance for any country in which they are present, and it does not cost the government any financial burdens, which should be considered during the coming period.

How do you see Egypt’s performance in developing infrastructure?

Moreover, the state continued to consider land as a commodity to achieve the highest return on investment, which caused a lack of real development based on the good use of land. Therefore, the government must focus on changing that view, and classify land based on an opportunity to develop and integrate an urban community because each plot of land represents an industrial and agricultural opportunity, as well as an opportunity for a better citizen, a stronger country, and a more developed economy.