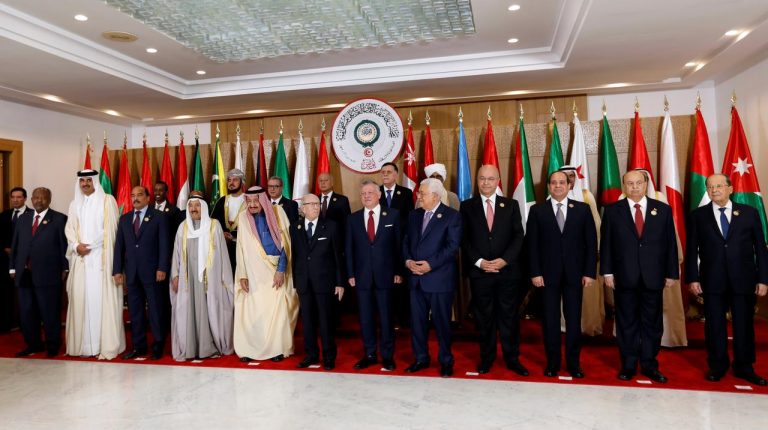 The 30th Arab League Summit kicked off on Sunday in Tunisia with the attendance of all Arab leaders, in which the Palestinian cause was the main topic of their discussions along with other regional issues.

The summit began with a brief speech by Saudi King Salman Bin Abdul Aziz Al-Saud who expressed absolute rejection for any measures that impact the Syrian sovereignty over the Golan Heights, and reiterated Saudi Arabia’s position in supporting the establishment of a Palestinian state in the West Bank and the Gaza Strip, with East Jerusalem as its capital.

Tunisian President Beji Caid Essebsi announced that the summit is for “Determination and Solidarity,” calling on Arab leaders to unite in the face of regional challenges.

Holding this Arab summit sends a message of the importance of establishing a Palestinian state, he added.

In his speech, Essebsi asserted his country’s support toward the Palestinian cause, and that his country will stand in support of the occupied Palestinian territories that should form the core of a future independent Palestinian state with East Jerusalem as its capital. He also highlighted the importance of coordinating the efforts of Tunisia, Egypt, and Algeria to maintain the security and stability of neighbouring Libya.

Moreover, secretary-general of Arab League, Ahmed Abou El-Gheit, said that “the summit is being held while Arab peoples are in conflicts, and many Arab children are suffering from the bitterness of murder, abandonment, and displacement due to wars and terror acts.”

Aboul Gheit stressed that political solutions are the hope of ensuring stability for Arab countries, adding, “there are no winners or losers in civil wars, but the only losers are the homelands.”

“The actions of some regional countries toward Arab countries exacerbate the conflict in the region,” Aboul Gheit stated, referring to Iran and Turkey.

The Tunis summit is the first time that the leaders of Saudi Arabia and Qatar were seen at the same gathering since 2017 when Riyadh and four other Arab countries boycotted Qatar upon accusations of financing terrorism.

The two-day summit will also tackle the Syrian and Libyan issues, and the situation of Jerusalem and the Israeli-occupied Syrian Golan Heights.