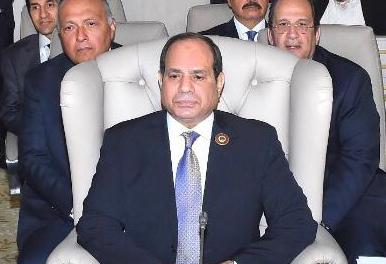 The president was welcomed by Tunisian officials and a military parade at Carthage airport. Al-Sisi addressed the status of Jerusalem and the Israeli-occupied Syrian Golan Heights. He also discussed the challenges faced by Arab countries in the last eight years since the start of the Arab Spring, especially denoting Libya, Syria, and Yemen.

“The Arab Summit comes at a critical milestone in the history of the Arab world. We are ahead of an important entitlement, namely an all-out confrontation of all forms of terrorism,” he said.

President Sisi called for a prompt move within the framework of the Geneva Peace Talks to reach peace in Syria. “It is high time the Arab bloodletting has stopped,” he stressed.

“It is obvious that this summit comes at a critical juncture in the history of our Arab nation when challenges and crises have increased and missions required to confront them are complicated,” the president said.

Furthermore, the president said that as long as the Palestinian people are oppressed the international community will be shamed.

He also stressed that countering terrorism is essential but not enough without renewing the religious discourse which will eliminate the misuse of religion by extremists.

Moreover, the president urged for immediate action to solve the civil war in Syria, via a solution which keeps the country’s unity and safety. Concerning Libya, President Sisi urged the international community to act to apply all decisions and resolutions issued by the UN to solve the crisis in a political manner, but in the same way quell all activities by the militant groups.

“It is time for Arab nations to pick up the pace regarding economic development,” president Al-Sisi said as he urged Arab countries to abandon differences and reconcile. “Only then would such a painful phase that has wasted the Arab region’s energy and power for seven decades end, and a new phase of just peace and reconstruction would begin,” he added.