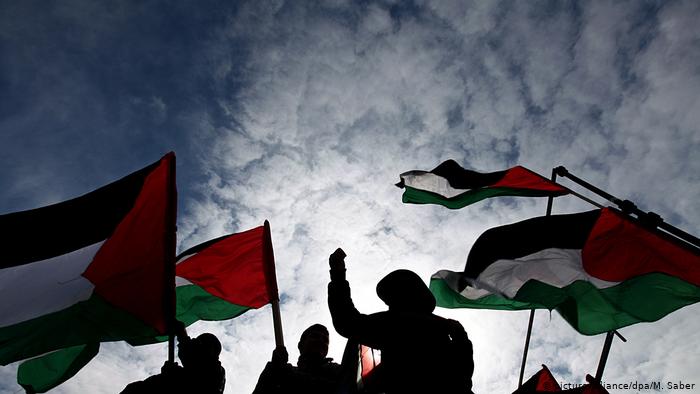 A Palestinian man in his early 20s was killed by Israeli armed forces early on Saturday on the Gaza Strip’s border, the territory’s health ministry stated. The ministry said Mohammed Saad died after suffering from head wounds caused by shrapnel. 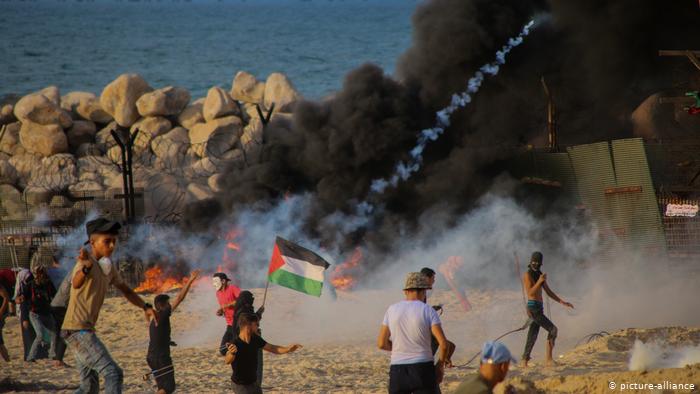 The incident came just hours before the Gazans’ expected mass protests which could disrupt a fragile calm between Israel and Hamas, as the Jewish state is preparing to hold elections within 10 days.

Haniyeh had gone into hiding since Monday, fearing retaliation from Israeli forces, following the recent rocket attack in Tel Aviv. He said in a written statement that the Palestinian people “will not surrender” and its military factions “will deter the enemy if it exceeds the red lines.”

In response to the Israeli airstrikes, Hamas fired at least 10 rockets toward the southern Israeli town of Sderot late Monday. There were no immediate reports of casualties.

Rockets do not normally reach so far into the country. The Monday’s attack comes 10 days after other rockets were fired at Tel Aviv for the first time in two years. Hamas leaders in Gaza claimed that incident was an accident. Nevertheless, Israel responded with heavy fire.

The planned demonstrations will cap off a year of regular protests calling for the right of Palestinian refugees to return to their homes from which they were forced to leave in the 1948 war which accompanied the creation of Israel.

More than 200 Palestinians have been killed by the Israeli army since the protests began. At least 62 were shot dead in a single day in last May during clashes, fuelled by the transfer of the US embassy in Israel to the disputed city of Jerusalem. About three Israeli soldiers have also been killed in those clashes. 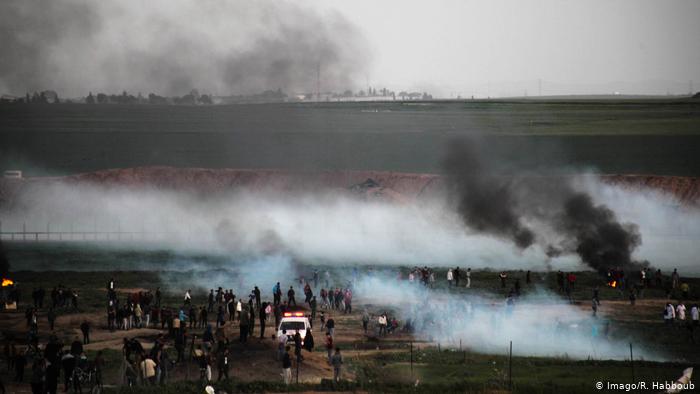 Palestinians called to celebrate the first anniversary of ‘Great March of Return’ which was kicked off on 30 March 2018 by refugees protesting against Israeli occupation which displaced them from their homes and land. The ‘Great March of Return’ commemorates the ‘Land Day’ which started in 1976 after Zionist authorities expropriated many lands.

What commemorated the protests was the decision of United States President Donald Trump who announced the transfer of the American embassy in Israel from Tel Aviv to Jerusalem, and recognising Jerusalem as the capital of Israel.

Palestine has been suffering from violent and brutal attacks since it has been occupied by Israel, leading to all kinds of resistance starting from stone-throwing which is often responded to by heavily shooting from Israel. Lately, Palestinians have started launching fire kites and explosive balloons from the northern Gaza strip into southern Israel.

Noteworthy, Israel passed a law in 1980 declaring that Jerusalem is the capital of Israel, but the Security Council of the United Nations (UN) interfered and declared a resolution stating that the law was null and void and that Israel is violating the international law.

Early last week, the UN said it will step up the presence of monitors in Gaza after its human rights body said Israel’s shootings of Palestinians could be deemed as crimes against humanity.

Five UN human rights officers will be sent to Gaza to monitor “ongoing violations” against civilian protesters after hundreds were killed in demonstrations last year.

The UN Human Rights Council passed a resolution on Friday condemning the “apparent intentional use of unlawful lethal and other excessive force by Israel” and called for the perpetrators to face justice.

The body asked for cooperation with an International Criminal Court examination into Israeli violations opened in 2015. The resolution passed with 23 votes in favour, eight against, and 15 abstentions, with European states divided.

Saturday’s planned protests could increase pressure on right-wing Israeli Prime Minister Benjamin Netanyahu to show that he is in control in the confrontations with Hamas ahead of the elections, where he is facing a strong challenge from former army chief Benny Gantz. Last week, the Israeli military struck dozens of Hamas targets in Gaza in response to a rocket fired by unidentified group against Israel.

The demonstrations are expected to draw thousands to various sites along the border between Israel and the Gaza Strip, where 2 million Palestinians reside in living conditions described by the UN last September as causing “profound suffering and aid dependency.” Israel has maintained a blockade on the enclave for more than a decade, greatly reducing the territory’s productive capacity. Israel says the blockade is necessary to contain Hamas. It also rejects the right of Palestinian refugees to return to their former homes, saying Israel could not cope with the mass influx.

Avichai Mandelblit, the Israeli General Prosecutor, accused Netanyahu of bribery, fraud, and breach of trust, arising from three different corruption cases, which are pending a hearing.

Netanyahu’s political opponents accused him of making Israel lose its power to deter attacks, after Hamas launched two rockets toward Tel Aviv on 14 March, for the first time since the 2014 war.

Israeli forces responded by striking 100 suspected Hamas targets on 15 March in the Gaza Strip, which made the ‘Great March of Return’ committee cancel the weekly protests on 15 March for the first time since last March.

The Jerusalem Post reported that the cancellation is to avoid further steps from Israeli forces, saying that “Hamas and other Palestinian terrorist organisations decided to cancel last Friday’s weekly violent protests on the Israeli-Gaza border in order to avoid an escalation with Israel.”

Similarly, The Times of Israel reported that the Palestinian committee which organises weekly protests on the Gazan border has decided “to postpone” today’s protests “out of concern for our people and in preparation for a much larger protest on March 30,” the Hamas-affiliated Palestinian Information Centre reported.

“In Hamas they are very, very concerned about an Israeli decision to strike them, the deterrence exists 100%,” Likud’s ‘Netanyahu’s party’ member of the Knesset, Yoav Kisch said at a cultural event.

“The prime minister is dealing with the security issue as if there are no elections, and if need be we’ll conquer Gaza before the elections” he added. 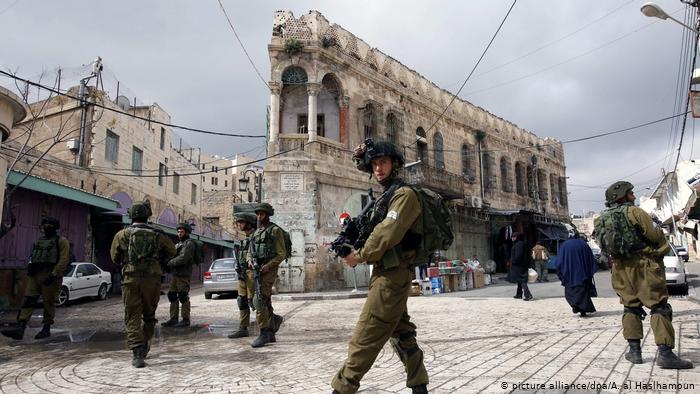 Meir Cohen from the opposite political party, Blue and White, criticised Netanyahu for making the situation in Israel terrible, “When people on the street tell me Bibi is a magician, I tell them he is a magician of one thing: He made Israel’s deterrence disappear,” Cohen said.

Another, Blue and White party member, Orna Barbivai said “On the one hand we need to strike Hamas, which is a brutal terror group, and on the other hand recognise the needs of the civilian population in Gaza, which itself is beginning to understand the need to oppose Hamas,”

It all started when in the 1920s Britain mandated Palestine according to the Balfour Declaration, which supports the establishment of a national home for the Jews around the world in Palestine. Jerusalem was the capital of the mandate, where the British rulers and institutions of the mandate government lived, and in the mid-1930s, Britain changed its policy and tried to stop the migration of Jews into Palestine.

In 1948, Egypt, Jordan, Iraq, Syria, Lebanon, and Saudi Arabia entered a war against the armed Zionist entity in Palestine, which was formed out of the Palmach, the Arjun, the Haganah, the Stern and Jewish volunteers.

The war started on May 1948, and on 10 June 1948 UN Security Council interfered, and imposed a ceasefire upon all the parties, and a truce was in place for four weeks. Despite the prohibition of arming and any new troops’ supply, Israel did not comply with this prohibition, and quickly reinforced its losses, and it was heavily supplied with arms, especially planes, with many European Jews volunteering to go to the war front.

In July, the Israeli army continued the war, despite the UN’s attempts to extend the truce, so the battle took a different turn and Arab forces suffered defeats and losses, and Israel was able to illegally occupy great expanses of Palestinian territory.

In 1949, following the 1948 war and the abolition of the British mandate, Palestine was divided into three political units, which is Israel, the West Bank, and the Gaza Strip.

Since then, the West Bank and the Gaza Strip have been suffering from violations and the brutal Israeli occupation.