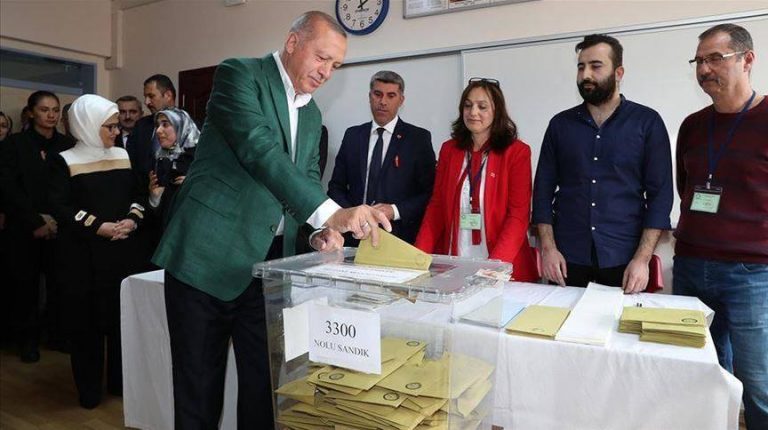 For the first time since 1994, the candidates of the main Turkish Opposition Republican People’s Party (CHP) has led in the mayoral race in Ankara, the capital city, and Istanbul, Turkey’s most populous city, according to the Turkish elections authority on Monday morning.

Despite the big lose in main cities, unofficial results of the Turkish municipal elections, held on Sunday, showed that the Justice and Development Party (AKP) won nearly 45% of the vote, according to the state-run Anadolu Agency.

The AKP said on Monday that it will object to invalid votes and irregularities in Ankara during the elections.

In a speech for his supporters on Sunday, Turkish President Recep Tayyip Erdogan said that 56% of municipalities in Turkey will be run by the AKP. “I would like to thank all my citizens, especially our Kurdish brothers, for showing sensitivity toward the issue of survival,” he said.

Erdogan said that his party gained the hearts of millions of the people and could not convince others.

The elections came amid a state of economic deterioration in the country as inflation has increased by 20%.

The Head of Turkey’s Supreme Electoral Council (YSK), Sadi Guven, announced that the CHP candidate Ekrem Imamoglu is leading the vote in Istanbul with 4,159,650 votes over the AKP’s Binali Yildirim with 4,131,761. Yildirim is the former prime minister.

Guven also said that parties can apply to the council on Wednesday to contest the results.

Despite losing the largest two cities, the capital Ankara and Istanbul, Turkey’s ruling party is leading with 16 large cities, and 24 smaller cities, according to the unofficial results.

“There will be no elections for four and a half years. What will we do? We will focus on national and international issues, and hopefully raise our country above the level of our contemporaries,” Erdogan said.

“This is an election done democratically and humanely, and success gained by this election will be welcomed not only by us but all over the world, as democracy is improving in Turkey. We say: ‘Turkey won’. After this election, everybody won,” Kilicdaroglu said.

On Sunday, millions of Turkish people cast their votes on Sunday in the municipal elections to elect Turkey’s mayors, city council members, ‘mukhtars’, and members of elder councils for the next five years.

US sets Turkey deadline to give up Russian missile deal