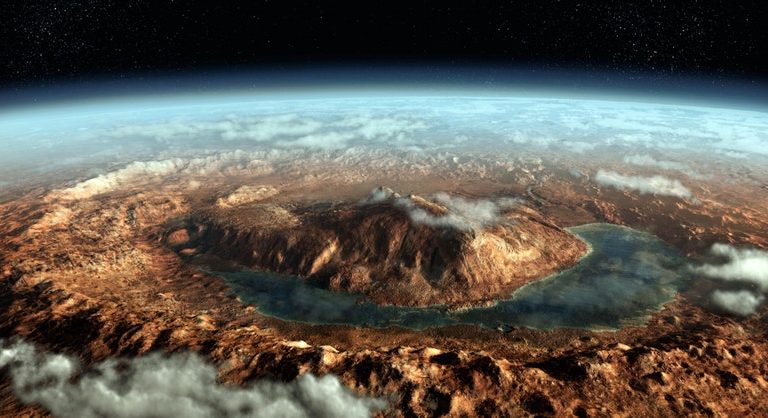 Researchers succeeded in detecting methane on Mars which is considered as an indicator for potential microbial life on the Red Planet.

In 2013, the Mars Express spacecraft detected methane near Gale Crater on Mars. On Monday, scientists published their findings about the first independent confirmation about methane on Mars in the Nature Geoscience journal.

This finding provides independent confirmation of debated measurements obtained by the Curiosity rover one day earlier.

Methane was discovered in the Martian atmosphere more than a decade ago, and was thought to have been produced biologically by microorganisms or by abiotic geochemical reactions. However, the potential mechanisms for its generation as well as the reliability of existing detections have been the subject of vigorous debate.

Marco Giuranna, a researcher in the Istituto Nazionale di Astrofisica and the first author of the study, told Daily News Egypt that methane is important because it could be an indicator of microbial life.

On Earth, methanogenic microbes produce methane. But even if methanogenic forms of life have not developed on Mars, methane can be produced by abiotic processes that are likely on the Red Planet.

That methane, though not a direct bio-signature of life, can add to the habitability of Martian settings, as certain types of microbes can use methane as a source of carbon and energy.

Beyond its relevance to potential life on Mars, methane trapped in the Martian subsurface may also constitute a resource for future human activities on Mars, as methane has been discussed as a propellant for return to Earth needs and as a fuel and a chemical/industrial feedstock that could support a sustained human presence, according to Giuranna.

In 2004, the Planetary Fourier Spectrometer (PFS) on-board the European mission Mars Express (MEx) reported the presence of traces of methane in the Martian atmosphere. Today, 15 years later, the same instrument reports a peak of methane abundance (15.5 ±2.5 parts per billion by volume) in the atmosphere above the Gale crater.

The observations of PFS are from 16 June 2013. The day before Curiosity, the NASA’s Mars rover, had observed quantities of methane similar to those detected by PFS within the same crater.

The contemporaneous detection of methane provided unique information to use in the search for its source locations.

Giuranna further added: “We made two independent analyses to home in on potential source regions of the methane. We divided up a wide region around Gale Crater into grids of about 250 by 250 square kilometres.”

In one study, collaborators from the Royal Belgian Institute for Space Aeronomy in Brussels applied computer simulations to create a million emission scenarios for each square, in order to predict the probability of methane emission for each of those locations.

In the other parallel study, geologists from the National Institute of Geophysics and Volcanology in Rome, Italy, and the Planetary Science Institute in Tucson, Arizona, scrutinised the region around Gale Crater for features that might be associated with methane release.

“Remarkably, we saw that the atmospheric simulation and geological assessment, performed independently of each other, suggested the same region of provenance of the methane, which is situated about 500 km East of Gale,” Giuranna said.

He explained that this is very exciting and largely unexpected that two completely independent lines of investigation pointed to the same general area of most likely source location for the methane.

This geological investigation was done independently from the general circulation model (GCM) analysis, by an independent team, without exchange of results prior to the finalisation of both paths of investigation.