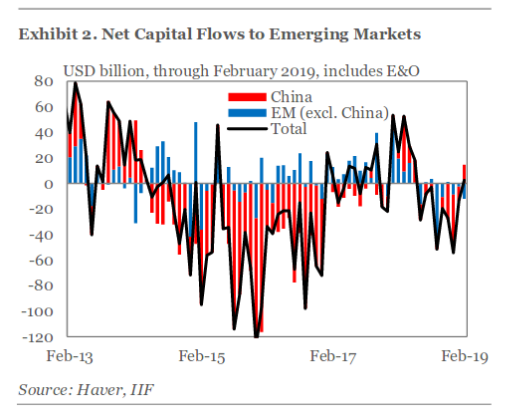 The Institute of International Finance (IIF) estimated in a report that the portfolio inflows to emerging markets (EM) reached $25.1bn in March.

The report explained that EMs’ stocks and bonds attracted positive but relatively modest, non-resident flows in March, after a strong performance in January and February with inflows of $52.6bn and $31.2bn, respectively.

“We estimate that EM securities attracted $25.1bn of foreign capital in March,” it continued.

The report added that March witnessed $17.6bn in debt inflows, after a reading of $18.2bn in February.

“The level of debt flows was mainly explained by inflows to EM Asia and Latam ($10.0bn and $3.9bn, respectively). For equity flows, our headline tracker for March ended at $8.1bn,” the IIF stated.

The report explained that the reading for EM, excluding China (ex-China) equity flows was $6.6bn, while China’s flows were $1.6bn.

The IIF’s measure of net capital flows to EM (including banking and FDI flows) was $2.4bn in February.

“Revisions prompted by the fourth quarter of 2018, data for many countries suggest that January saw small outflows from EMs rather than the net inflows we initially estimated. Driving February’s result were positive flows of $14.7 bn to China, after witnessing outflows for eight consecutive months,” the report added.

However, the overall picture was clouded by cumulative outflows from EMs including China (x-China) of $12.2bn.

“In particular, after solid inflows in January, India (-$1.5bn) and Turkey(-$1.9bn) fell back into negative territory. Saudi Arabia and Russia continue to weigh on our tracker, posting outflows of $11.8bn and $7.1bn, respectively,” the report assured.