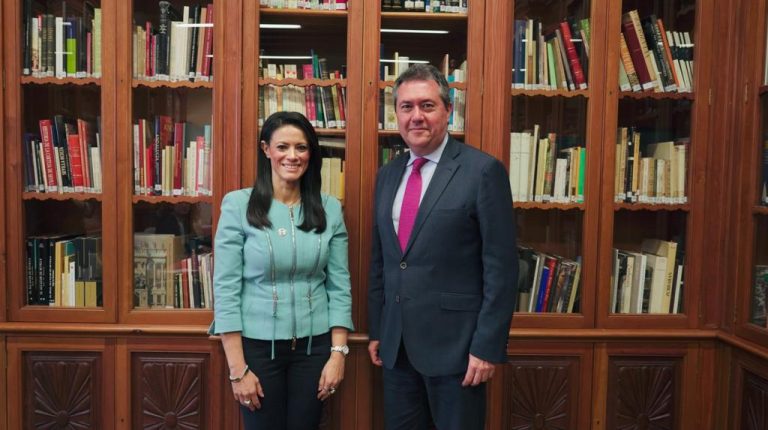 Egypt’s Minister of Tourism Rania Al-Mashat met with the Mayor of Seville Juan Espadas to discuss cooperation in the field of tourism between Egypt and Spain, notably Seville.

The meeting comes on the sidelines of Egypt’s participation in the 19th session of the WTTC Global Summit 2019, which held in the period from 2 to 4 April in Seville, Spain.

The Spanish mayor pointed out that the possibility of establishing a twinning partnership between Seville and some Egyptian tourist cities, with the aim of activating the tourism movement between the two countries.

He invited Egypt to participate in the international conference of tourist cities that will be held in Seville in 2020.

The bilateral meeting also discussed the possibility of increasing cooperation between Egypt and Spain in the coming period through the Euro-Mediterranean and Local Assembly (ARLEM), which is the permanent joint assembly comprising of the local and regional authorities of the three shores of the Mediterranean, that was designed to provide an institutional framework, bringing members of the Euro-Med parliaments, representatives of European associations participating in Euro-Mediterranean together with the aim of increasing cooperation with their counterparts.

During the meeting, the two sides also discussed the possibility of organising Fam trips from Seville to various Egyptian cities, including Marsa Alam and Siwa city.

Al-Mashat also met with her Bulgarian counterpart, Nikolina Angelkova, on Wednesday, to discuss means of enhancing cooperation between the two countries in the field of tourism during the coming period.

The meeting also tackled the Bulgarian president’s recent visit to Egypt in March, that resulted in the launch of the Egyptian-Bulgarian Business Council.

The two parties talked about the memorandum of understanding that was prepared between the tourism ministries of both countries, which aims at enhancing bilateral relations and contributing to the economic development and growth of the tourism sector in both countries through the development of joint tourist products in the cultural, historical, touristic fields.

The WTTC annual event was attended by a large number of leaders in the tourism and travel industry around the world, which makes it a platform for decision-makers in the tourism industry with representatives of the private tourism sector to discuss the future of tourism as well as increasing awareness of the economic and social impact of this industry on the world.