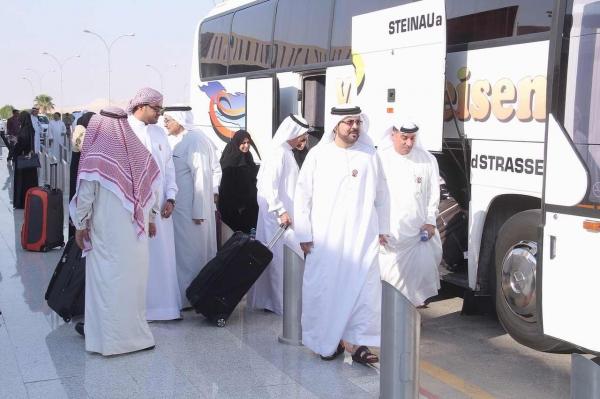 Arrivals from the Middle East to Egypt are expected to increase by 50% from 1.49 million in 2018 to 2.23 million in 2022, with visitors from Saudi Arabia driving this growth, according to data published ahead of the Arabian Travel Market (ATM) 2019, which takes place at the Dubai World Trade Centre from 28 April to 1 May 2019.

While arrivals from Europe are expected to be the largest contributors on a regional basis, increasing from 6.2 million in 2018 to 9.1 million tourists in 2022, the latest research from Colliers International revealed arrivals from the Middle East will actually witness the highest compound annual growth rate (CAGR) at 11%.

Danielle Curtis, exhibition director ME, ATM, said: “Over the last 12 months, Egypt’s tourism industry has witnessed healthy and steady growth, with arrivals up to 14.5% from 8.3 million in 2017, to 9.5 million in 2018. Growth has been fuelled by the cheaper Egyptian pound and government incentives for charter airlines operating international flights.”

“Adding to this, we are witnessing this growth first hand at ATM with the total number of attendees coming from Egypt increasing 16% year-over-year.”

Taking advantage of this resurgence in tourists are some of Egypt’s most prominent tourism companies including Dana Tours, Nicolas Tours, and Standard Tours who will exhibit at the ATM 2019 – and of course the Egyptian Tourism Promotion Board who will have a major presence too.

Egypt’s tourism capital investment is estimated to reach $ 4.2bn (EGP 75bn) in 2019, up by 25% in 2018, as the country strives to keep pace with an ongoing leisure travel upsurge and GDP growth.

“The overall revenue generated by the leisure segment in 2018 represented 87% of total tourism spending and we expect this growth to continue as a series of new government and private sector attractions and investments are unveiled – including the development of new airports and new luxury hotel resorts in Red Sea destinations Sharm El Sheikh and Hurghada,” Curtis said.

Egypt has a diverse range of source markets – decreasing the risk of being over-reliant on one specific market. Germany, Russia, the UK, and Italy are Egypt’s top four source markets, with the first and last in highest tier – both growing 29% in 2018 – and showing the highest CAGR growth of 11%.

The UK, which recorded just a 4% increase in arrivals between 2017 and 2018, has traditionally been a long-standing major source market for the Red Sea resort of Sharm El Sheikh. However, an ongoing ban on direct flights between the two destinations has stifled visitor numbers.

Curtis added: “It is hoped the recent resumption of Serbian flights to Sharm El Sheikh after a six-year absence and the introduction of Turkish Airlines’ daily flight from Moscow to the Red Sea via Istanbul, will kick-start direct flights between the UK and Egypt, and of course Russia and Egypt.”

The ATM is considered by industry professionals as a barometer for the Middle East and North Africa’s tourism sector, and welcomed over 39,000 people to its 2018 event, showcasing the largest exhibition in the history of the show, with hotels comprising 20% of the floor area.

What is brand new for this year’s show will be the launch of Arabian Travel Week, an umbrella brand comprising of four co-located shows including the ATM 2019, the ILTM Arabia, CONNECT Middle East, India and Africa – a new route development forum and new consumer-led event, the ATM Holiday Shopper.