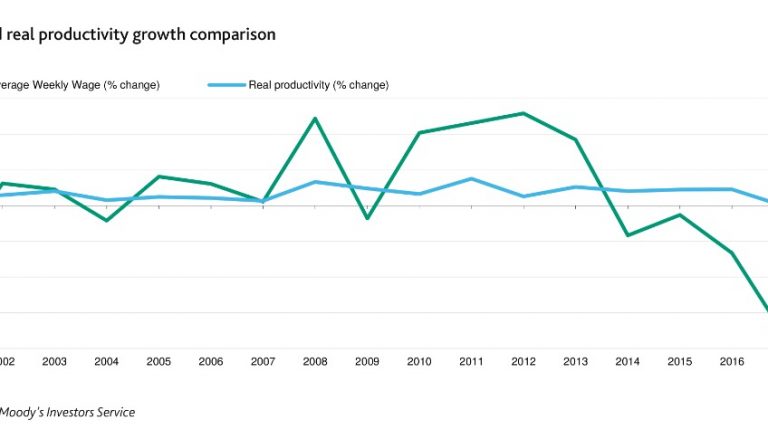 Credit rating agency Moody’s forecast that Egypt is to achieve a growth of 5.8% for the fiscal year (FY) 2019/20, a fiscal deficit of 7.5%, and a primary surplus of 1.7% of the GDP, the agency announced on Thursday.

Furthermore, the report indicates that in addition to improved revenue collection, the budgeted deficit reduction of about one percentage point of the GDP stems mostly from a reduction in expenditures, and in particular involves the share of subsidies, grants, and social benefits.

According to the report, petroleum spending cutbacks will reach an estimated 0.7% of the GDP from 1.7% in FY 2018/19, following the completion of fuel subsidy reform by June this year, and the continued reduction in electricity subsidies will create some fiscal space to expand spending for targeted income transfers and social welfare payments, including an increase in pension transfers to 1.3% of the GDP from 1.2% in FY 2018/19.

Furthermore, the indexation mechanism for 95-octane fuel, adopted by the authorities in April, is reflective of international energy price trends, and will be extended to other types of fuel once full cost effectiveness has been achieved at the end of FY 2018/19, the report indicates.In regards to the public sector wage increases, Moody’s believes that the wage bill to remain at about 5% of the GDP as compared to a further reduction to below 5% of the GDP under IMF programme parameters, and significantly lower than the 8.5% of the GDP registered in fiscal 2014.

“In light of the significant real wage and purchasing power erosion that middle- and low-income households have faced following Egypt’s currency flotation in November 2016, we expect calls for similar minimum wage adjustments in the private sector to follow,” the report states.

Moreover, the report forecast that while a one-off wage increase can be accommodated and is likely to support private consumption, a sustained increase in real wages would erode some of Egypt’s regained price and wage competitiveness relative to peers, unless it is supported by sustained increases in labour productivity growth.

In contrast to the IMF programme parameters, the fiscal 2019/20 budget includes a higher share of public investment spending (purchase of non-financial assets) at 3.4% of the GDP versus 2.8% in FY 2018/19.

Part of this spending increase will be funded with the sale of minority stakes in public enterprises and can be sequenced accordingly. The largest spending item will remain the interest bill at 9.2% of the GDP, a similar amount to what we estimate for FY 2018/19.

“We expect a gradual reduction to 8.5% of the GDP in fiscal 2021 as inflation trends down with the end of the one-off price level effects of subsidy reform and tariff hikes, allowing the central bank to lower interest rates while preserving price stability,” the report concludes.