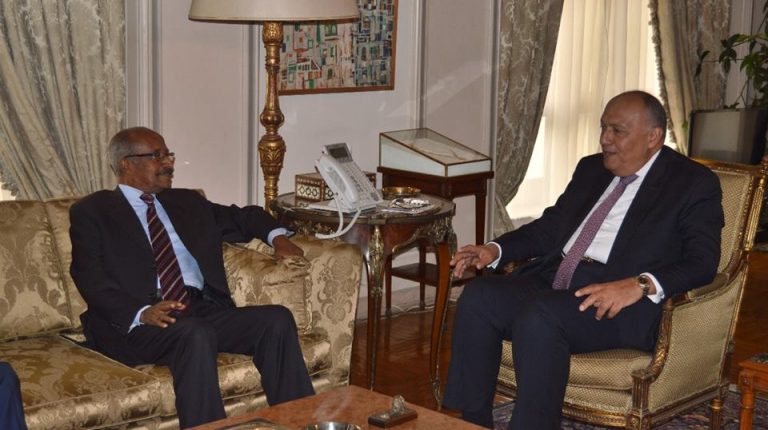 The Minister of Foreign Affairs, Sameh Shoukry, discussed bilateral relations and mutual cooperation between Egypt and Eritrea with his Eritrean counterpart Othman Saleh in Cairo on Wednesday.

During the meeting which was attended by Yamani Gabre, the political adviser of the Eritrean President, Shoukry addressed with Saleh and Gabre the mutual projects as well as several regional issues of mutual interest.

Shoukry stressed Egypt’s interest in developing its relations with Eritrea in all fields, as well as Egypt’s aspiration for the upcoming visit of the Eritrean President Isaias Afwerki to Egypt, according to a statement from the foreign ministry’s spokesperson, Ahmed Hafez.

Hafez added that the two sides discussed mutual cooperation projects in a number of priority areas for the Eritrean side such as establishing a fish feed factory, setting up two power plants, cooperation in fishing, and implementing a number of infrastructural projects.

They also discussed signing a memorandum of understanding concerning the exchange of visa exemptions for official passports between the two countries. Additionally, they addressed the issue of the security of the Red Sea and regional situation, as well as the means of achieving stability in the Horn of Africa.