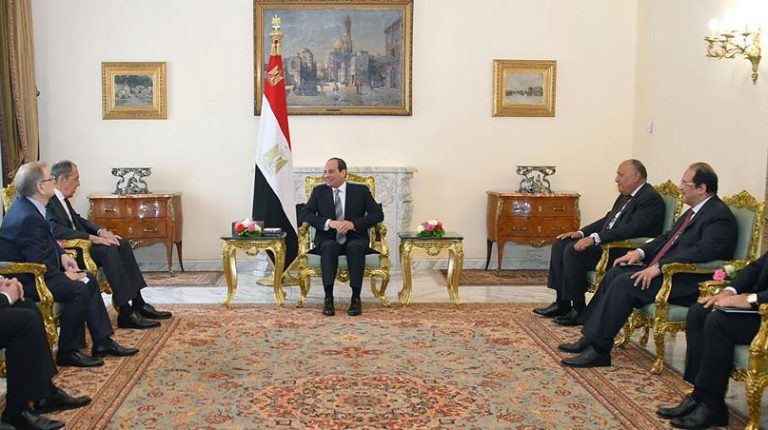 Al-Sisi and Lavrov addressed enhancing bilateral cooperation and increasing trade exchange between the two countries, as well as other issues of common interest.

Later on Saturday, Lavrov met with Egyptian Foreign Minister, Sameh Shoukry, and they discussed the return of direct flights between Egyptian and Russian cities, as well as recent updates in the Middle East.

Subsequently, both held a press conference where Lavrov revealed that a forthcoming Egyptian-Russian summit is to be held this year in Sochi between the two countries’ leaders, Al-Sisi and Putin.

For Shoukry, he highlighted that both ministers discussed combating terrorism and extremism in the region, and the recent tensions in Libya, as well as the updates in both Syria and Palestine.

Shoukry called on all parties in Libya to show restraint, adding that regional parties are fuelling the tension in the North African country. The Egyptian Foreign Minister asserted that the political solution is the only way to tackle the crisis, noting that there is no place for a military solution.

Meanwhile, Lavrov called for an unconditioned dialogue between the parties involved in the conflict, warning of external interference in Libya.

Khalifa Haftar’s Libyan National Army (LNA) forces advanced into the southern outskirts of Tripoli, as Haftar launched a campaign against what he described as “terrorist groups.”

“I still hope it is possible to avoid a bloody confrontation in and around Tripoli. The UN is committed to facilitating a political solution and, whatever happens, the UN is committed to supporting the Libyan people,” Guterres tweeted. Meanwhile, the UN security council called on the LNA to halt the Tripoli campaign.

Since the fall of Muammar Gaddafi in 2011, Libya has remained in chaos and is divided between three governments and two rival parliaments. The country has been suffering from a financial crisis due to clashes between militias and forces loyal to these governments.

Late in 2015, the UN reached an agreement to form a new “unity” government headed by Prime Minister Fayez Sarraj, based in Tripoli, while the other two remain in the eastern cities of Bayda-Tobruk and Benghazi.