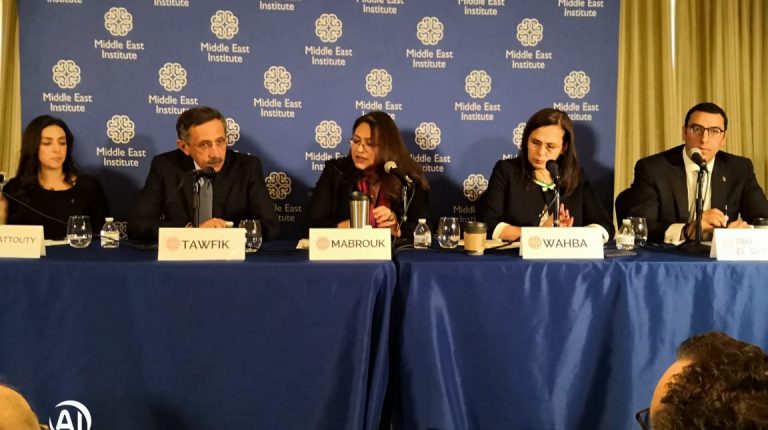 Washington, DC- Tarek Tawfik, president of the American Chamber of Commerce (AmCham) in Egypt and head of the door-knock mission in Washington, said that by comparing the current economic situation in Egypt to the period following January 2011 Revolution, several substantial achievements can be observed, especially during the last four years.

“The adopted economic reform programme has overturned all of this, so that the GDP growth can currently stand around 5.5% and the subsidy system was boldly reformed, in an attempt to reduce the budget deficit to 8.7% of the GDP, while the foreign currency market became fully liberalised, and unemployment fell from 14% to 9%,” he added.

During a seminar on the role of the private sector in the Egyptian economy-organised by the Middle East Institute in Washington, and attended by a large number of Americans interested in the Egyptian market-Tawfik said the Egyptian economic reform programme has two main aspects, the first is fast track reforms, and the second is the clear political will to continue such reforms until we realise a GDP growth rate of 7.5%.

Hence, it was natural that such reforms would encourage the private sector to inject more investments, especially for the small and medium-sized enterprises (SMEs) sector, in addition to integrating Egypt’s informal sector into the formal economy, he emphasised.

Answering a question by one of the American attendees about competition between the public and the private sectors, Tawfik said the public sector only participates in infrastructure and national megaprojects, which need to be speedily implemented and cannot be completed by the private sector alone. “Crowding the private sector in any industrial or business activity, such as the food industry, was unacceptable and did not happen,” he stressed.

The AmCham head pointed out that the private sector’s share of existing investments currently stands at 55%, compared to 45% for the government sector, up from 45% four years ago. The target is 70% in the next three years.

Tawfik said that Egypt ended the monopoly in the gas sector and allowed the private sector to import and distribute in the local market, and it also eliminated many taboos in terms of regional cooperation in the gas sector. Egypt managed to exploit its energy infrastructure to become the most important regional energy and gas hub.

He pointed out that agriculture consumes about 70% of the water used in Egypt, and that there is room for reducing water consumption in agriculture by about 50% through modern irrigation methods, which means that Egypt can double the cultivated area with the same amount of water. There is about 30% crop loss which also indicates the existence of significant opportunities for investment in the food industry and the packaging of crops.

“There are Egyptian world-class skills in various fields, such as entrepreneurship, which prompted many Egyptian expats to return home and establish their own projects in Egypt,” she explained.

Wehbe added that improving the status of women in the business world is already a challenge, and there are many initiatives to deal with this file.

“The number of startups is increasing, and we are hearing every day about innovative models in this field and there is a base of smart young people who are challenging global competition in terms of innovation and technology,” said Girgis Abd El-Shahid, a member from the mission.

Abd El-Shahid added that there are three things that would leapfrog Egypt if it implemented it, the first of which is the complete liberalisation of the energy market, including the household in this system.

The second is to activate the implementation of the Investment Law, which would help SMEs. The third is the Cybercrime Law in order to secure the information systems.

He added that as Egypt progresses with sound infrastructure and more efforts to intensify the rule of law, Egypt will attain a considerable breakthrough.

“The most important thing about economic reform is increasing national income levels and prosperity,” said Sarah El Battouty, a member from the mission, adding that Egypt is on the right path toward achieving sustained and long-term growth.

She called for relying on Egyptian skilled labour, rather than foreigners in some cases, noting that the ongoing academic and practical rehabilitation of young people will allow them to work in Africa and everywhere.

Furthermore,  El Battouty stressed that the best solution to the overpopulation problem is to develop basic services, especially education and health, and to give increased attention to women.