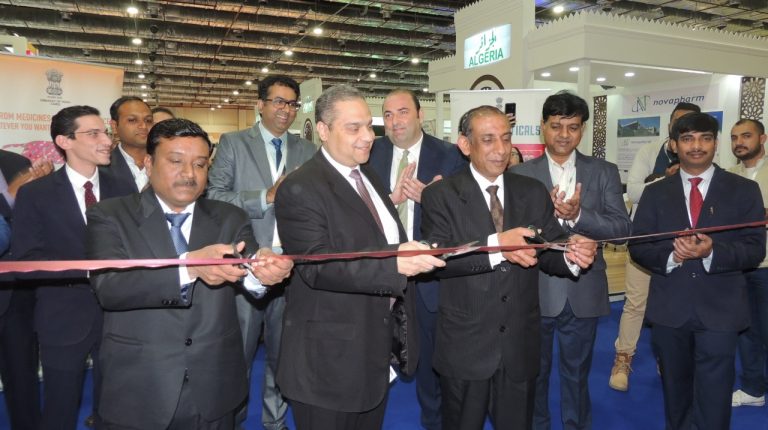 Tamer Essam, the deputy Egyptian Health Minister, along with the Indian Ambassador to Egypt, Rahul Kulshreshth, and representatives from the Pharmaceutical Export Promotion Council of India (Pharmexcil) inaugurated the Indian pavilion at the Pharmaconex 2019 edition. The exhibition is held at the Egypt International Exhibition Center (EIEC) from 6-8 April.

A delegation of Pharmexcil, comprising of 26 Indian pharmaceutical companies, is participating in the event, according to a press statement of the embassy on Sunday.

India’s pharmaceutical industry covers most of the therapeutic segments with almost all types of dosage forms, said the statement, adding that India’s exports of pharmaceuticals in 2017/18 reached about $17.3bn.

The Indian pharmaceutical industry has several thousand manufacturers, many of whom are approved facilities from international organisations, exporting the largest share of generics to the world. With a 20% share in the global trade of generics, India is able to provide cost effective and affordable medicine, noted the statement.

Moreover, Indian pharmaceutical companies have come of age with several biosimilars, peptides, and futuristic recombinant proteins being manufactured and marketed not only in India, but also exported to several countries.

Several multinational corporations have opened their research and development centres in India, owing to the huge technological pool of scientists in India to conduct cost effective research for new molecules. Contract research and manufacturing activities are offered cost effectively and are actively pursued in India.

The participation by Pharmaxecil in Pharmaconex 2019 is expected to benefit the pharmaceutical industry in both countries and further strengthen the bilateral trade and investment ties in the sector between the two countries.