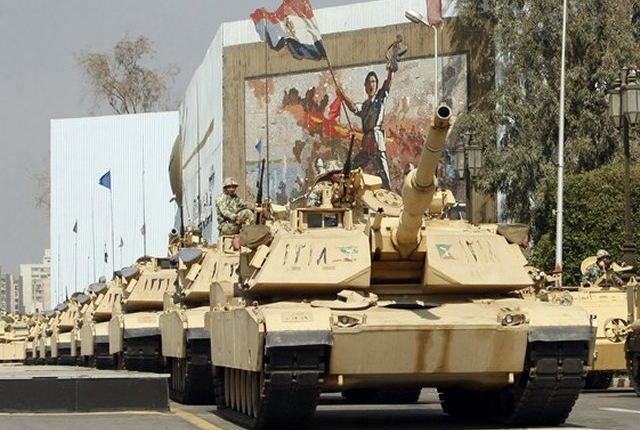 After the 2013 protests, there were fluctuations in Egypt’s foreign relations, and one of the files was the American weapon deal which was halted since October 2013. It includes 12 F16 aircrafts, 20 harpoons, and 125 MPA 1 tanks. They were suspended later in 2016.

The deals then varied and included five Abram M1A1 tanks, which are produced through Egyptian-US joint cooperation. These tanks are assembled in a joint production factory after receiving their spare parts from US. There were also Apache planes which Egypt received 10 from, and F16 aircrafts, as well as a mobile surveillance system in order to monitor the situation on the Egyptian-Libyan borders.

Since Al Sisi took office, Egypt has been trying to diversify its sources of weapons from many countries, including France, Germany, Croatia, and Russia. Experts have estimated that Egypt imported about 70% of its weapons from Russia.

With Al Sisi’s visit to the US, the talk about weapons returns, as well as the impact of diversifying weapons in Egypt and breaking the cycle of dependence on the US weapons.

Commenting on that file, Major General Mahmoud Diaa, Egypt’s defence consultant, said that Egypt is adopting a policy to diversify its weapons, because relying on one source of weapons is a kind of hegemony, and Egypt is now completely against this.

Diaa provided the example of Egypt-Russian cooperation, saying that the military cooperation with Russia was halted for years, as the political leadership saw the high priority of taking the US side as a result of the peace agreement between Egypt and Israel which included an American commitment to supply Egypt with major aid, including weapons. This required joint trainings between Egypt and the US.

Right now, the strategic point of view has changed. Diversifying weapons has become one of the Egyptian deterrent weapons.

Regarding the possibility of bringing up the weapons file or seeing the US’ resentment toward the Egyptian desire to diversify its sources for weapons, Diaa said that the visit aims to deepen the relations and the pivotal role of Egypt in the regional key issues. It is natural to bring up again the weapons file; however, it is difficult to pressure Egypt in this matter.

On the other hand, Major General Adel El Omda, adviser at Nasser Higher Military Academy and member of the Egyptian Council for Foreign Affairs, said that Egypt’s regional role in the files of Libya, Sudan, Palestine, and Israel is severely important.

The intelligence of the Egyptian leadership lies in the fact that it has managed to utilise the importance of its regional and international role and make sure there is a balance in its foreign affairs with the superpowers, at least with the permanent members at the Security Council. He added that the US resentment is natural, as it is evaluated from an economic aspect. Each state is concerned with exporting the largest amount of everything. “But we are also concerned with our interests and we have our completely independent decision,” he added.

El Omda ruled out the attempt of the US to impose pressure on Egypt in terms of the weapons diversification issue, especially that the US knows Egypt’s position and its importance in many files in the region.

Regarding the difference between the Egyptian and the Turkish situations, where the latter has seen direct pressure from the US and official warnings from sealing the Russian defence system ‘S 400’, El Omda stated that the situation is different. He added, “The American pressure on Turkey is natural because a major American military base is present in Turkey, unlike the case in Egypt, and also because Turkey’s relations with the surrounding countries have become more tense. Additionally, there is a general feeling in the world that Erdogan is looking for a kind of personal glory”.