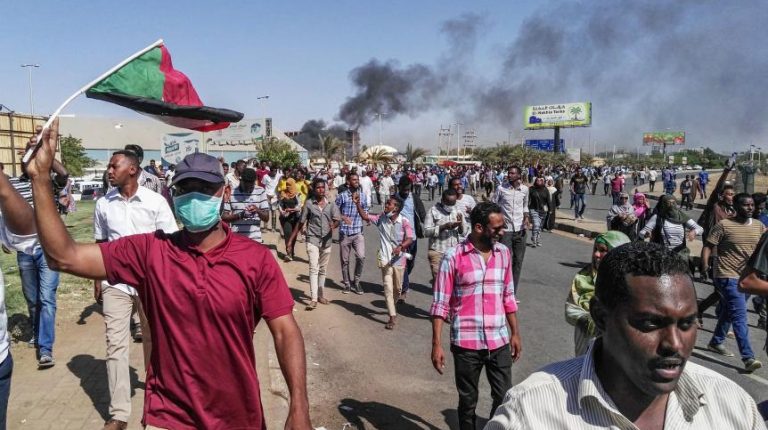 Sudanese army soldiers clashed with the security forces who attempted to forcibly disperse thousands of protesters outside its headquarters. The army opened fire in the air to stop the forces of the National Intelligence and Security Services (NISS), according to Sudanese media on Monday.

On Monday morning, Sudanese security forces fired tear gas at protesters in an attempt to break up a demonstration in front of the defence ministry in central Khartoum, but the armed forces defended the demonstrators, according to Reuters.

Clashes between the armed forces and security forces resulted in killing one of the military soldiers as he was trying to protect the protesters.

Sudanese Minister of Information and Telecommunications, Hasan Ismail, who is a government spokesperson, said that the demonstration in front of the NISS was terminated without any casualties in any parties.

Since 19 December 2018, Sudan has been witnessing mass protests calling for bread, then it transformed into political demands against the rule of Sudanese President Omar Al-Bashir who came to power 30 years ago. Protesters called for Al-Bashir’s resignation after the deterioration of the country’s economic situation and the tripling of prices.

More than 50 protestors were killed since the beginning of the demonstrations.

Thousands of Sudanese protesters have gathered outside the headquarters of the Sudanese army in central Khartoum since Saturday. They called upon the military forces to support them and force Sudanese President Omar Al-Bashir to resign.

“Sudan is rising, the army is rising,” the protesters chanted outside the complex which also houses Al-Bashir’s official residence and the ministry of defence.

The protesters chose 6 April to launch their sit-in outside the army headquarters as it marks the 1985 uprising that toppled the administration of former President Gaafar Nimeiry who was ousted by the army.

Meanwhile, the EU called for a peaceful process to achieve democratic reforms in Sudan, calling upon Sudanese authorities to avoid the use of violence against protesters.

“The European Union expects that the call for change will prompt a commitment to a peaceful, credible, legitimate, and inclusive process that will allow Sudan to carry out essential reforms,” read a statement of the EU Commission on Sunday.